Connacht huff and puff but Montpellier pull away at the end 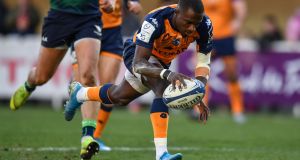 It went down to the wire, but the heartbreak belonged to Connacht as they signed off their Champions Cup with a 35-29 defeat to Montpellier in France.

In a game of no relevance to the pool five qualification, both sides produced a performance worthy of the competition, nine tries – six in the opening half – and the last on 77 minutes from left wing Yvan Reilhac to settle the result.

It may not have stopped Connacht’s recent run of defeats, now five in a row, but it certainly arrested “the mental hole” into which Connacht had fallen, says coach Andy Friend.

“Disappointing, another loss for us, but a much better performance. To go into the break at 21-all was quite incredible, and the second half was just a see-saw event. We had our chances at the death and just couldn’t get across.

“No doubt about it. We have been in a hole mentally, but I feel worked out of it last week in the performance against Toulouse. There was a lot courage, and it shows the character of the group to get four tries. We haven’t done that in a while.

“I just love their fight, I love the spirit, and we needed to see that out there. We scored some really good tries, defended bravely on a number of occasions, thought there were some really good passages where we started to play the football we had been playing previously. We also had a lot of bodies back, and that does make a difference.”

The opening 40 minutes was a game of two halves – the home side taking control and posting three tries by the 30th minute before Connacht wrested the initiative and followed suit in an electric 10 minute period.

The home side struck early – their big pack doing all the donkey work, but it was a contested kick won by left wing and match-winner Reilhac which provided the impetus for prop Levan Chilachava to crash over. As Connacht struggled to gain momentum, Montpellier seized turnover ball, with right wing Gabriel Ngandebe slipping a tackle before crossing. It got worse for Connacht when six minutes later the same player won another kick and chase for a third try and a 21-0 lead.

Friend, however, was delighted with Connacht’s response, particularly their opening try carved by patient pack play and finished by Matt Healy. Two minutes later a huge turnover from Eoghan Masterson gave the visitors front-foot ball as Godwin, and Tiernan O’Halloran provided the always dangerous John Porch who dived over. Within minutes Connacht had bagged their third in eight minutes, Bundee Aki’s ability to offload in the tackle providing the returning Kieran Marmion with the third try to level the sores 21-21 at half time.

As the game opened up more tries followed, Godwin bagged the fourth, the only unconverted try, while the home side replied through Reilhac again before Carty posted a penalty to put Connacht in front.

Big moments followed, particularly Connacht’s defence effort, while Bundee had a big say in the final 20 minutes with his indomitable ability to at the breakdown, winning the man of the match award.

Eventually, however, the home side’s power paid off with a try two minutes from time.

Replacements: A Bouthier for Vincent, V Giudeicelli for B Du Plessis, and U Tcheisvhili for Nariashvili, M Haouas for Chilachava (all 51), K Fotuali’i for Paillauge (57,) T Darmon for Pollard (68), K Mikautadze for Willemse (68), M Devergie for Camara (70), Pollard for Bouthier (70).