England expect Joe Marler to be available when rugby resumes 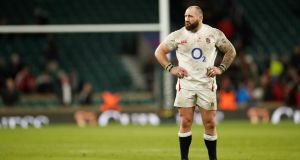 Joe Marler’s ban will expire without missing any matches for club or country. Photograph: Reuters

England expect Joe Marler to be available for selection when international fixtures resume amid suggestions the loosehead prop was considering walking away from the sport.

Eddie Jones had planned to visit Marler for talks before physical-distancing measures were introduced, in an effort to convince him not to retire. It had been suggested Marler, who quit international rugby in 2018 but reversed his decision last summer, had become disillusioned after he received a 10-week ban for grabbing Alun Wyn Jones’s genitals during England’s Six Nations win against Wales in March.

The assistant coach Matt Proudfoot has held discussions with a number of Jones’s forwards, including Marler, in an attempt to “build relationships from a home perspective rather than a camp environment”. Proudfoot revealed the main topic of conversation with Marler was parenthood, and the former Springboks assistant is expecting to reap the rewards the next time the pair are in camp.

“I try to have a list of players every day and [ON TUESDAY]it was Marler, [ELLIS]Genge, Mako [VUNIPOLA], Maro [ITOJE]and Charlie Ewels, ” said Proudfoot. “Joe was talking to me about his kids’ schooling and what he was doing with his kids and I can relate to that because I’ve got my own child. That relationship will benefit me in a couple of months’ time, when we are in camp.”

Proudfoot did, however, warn that Marler’s form must be up to scratch if he is to add to his 71 England caps. He had emerged as England’s first-choice loosehead during the curtailed Six Nations but his latest controversy meant another lengthy spell out of action. But because of the timing of the coronavirus crisis – and a secret Six Nations review – Marler’s ban will expire without missing any matches for club or country.

“First, Joe has to be selected for the English side – we will need to see how players come out of this process and who is on form. But Joe is somebody I rate very, very highly. He’s an incredible rugby player. The question will be answered in the future about how well he is playing and what form he is in, as it will for everyone else.”

Proudfoot believes players will need up to six weeks of “pre-season” before beginning contact training, let alone competitive matches again. World Rugby guidelines state that players should return to training gradually, initially with a distance of 1.5 metres between them. The governing body also warns against handshakes, hugging and spitting, and advises that full training should resume only when governments have permitted gatherings of 50 people.

“If you were to equate it to a pre-season you’d definitely need a five- to six-week typical pre-season programme before you could introduce players back into contact,” Proudfoot said. “I think consultation will need to be done between strength and conditioning, medical, and coaches, before a fixed programme is put into place. There is going to have to be consultation done on this with club and country.”