Bill Beaumont wins as rugby misses a chance to modernise 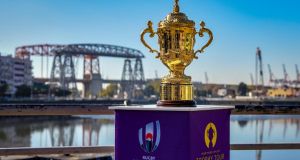 Rugby could have re-cast itself as a sport finally shaking off the chains of colonialism and old-world politics and daring to be something different. Photograph: Getty Images

Familiar English white smoke is once again billowing from the chimneys of World Rugby. Those who had hoped for a dash of Argentinian sky blue underestimated the powerful vested interests and conservative instincts still prevailing in rugby’s core heartlands, not to mention the widespread need for a comfort blanket in these uncertain times.

This is not to say that Bill Beaumont’s defeat of Agustín Pichot is a guaranteed backward step, merely that a glorious opportunity to reinvent the sport’s image has been spurned.

At a stroke, rugby could have re-cast itself as a sport finally shaking off the chains of colonialism and old-world politics and daring to be something different.

Instead, predictably, it has settled back into its comfy, well-stuffed European armchair, lit a fat cigar and blown more smoke rings in the direction of the southern hemisphere.

With the whole global game in danger of being razed to the ground by the ongoing coronavirus crisis, it was perhaps not the best moment to invite panic-stricken unions to take a punt on an idealistic outsider.

The decision to go ahead with the vote despite the global lockdown certainly played into the safer pair of hands. Stuck at home in Buenos Aires, Pichot’s effervescent passion, energy and charisma could ultimately only take him so far.

With respect to a redoubtable rugby man who was a successful leader of England and the British and Irish Lions, the 68-year-old Beaumont is to Zoom what Ann Widdecombe is to TikTok.

The mind also rewinds to September 2018 when Pichot, having seen the inner workings of the governing body from within as Beaumont’s vice-chairman, stood in the passageway of World Rugby’s Hall of Fame in Rugby and spoke frankly from the heart.

“If rugby wants to be big and a sound business, we cannot behave like an old-school organisation,” he told a couple of us. “I’m not going to be an accomplice to rugby’s ruin.”

He could already see the onrushing evidence that rugby urgently needed a different financial model and nothing that has happened since has altered that particular equation. What chance now of changing the prehistoric voting arrangements that see established unions receive three votes apiece compared with two or one for their tier-two brethren?

With more men named Brett on the new executive committee than there are women, there is certainly a whole lot more to do on the inclusivity front.

Given the state of many balance sheets in the southern hemisphere, there also needs to be a push to create a sustainable Test schedule that works for all and dovetails with the club game, rather than marginalising the latter.

Already there is suspicion among the clubs about the motives of Bernard Laporte, Beaumont’s new vice-chairman, whose extraordinary knack of garnering votes in unlikely places helped swing this election just as it did France’s 2023 World Cup bid. Laporte was recently on record as saying the existing European club tournaments do not make enough money and touting a club World Cup instead.

How that chimes with a post-Covid-19 landscape we will have to wait and see but the smaller rugby nations who pledged their votes to an avuncular, smiling Laporte in expectation of Europe’s bigger nations ceding any power or influence might be advised to go away and examine the small print.

Maybe, somehow, it will all work out for the best: rugby, in its darkest hour of need, will finally come together under its familiar, well-connected leader and thrash out the mutually beneficial blueprint – whether it be a global season or something cleverer – for which the game has been crying out since the dawn of professionalism a quarter of a century ago.

Maybe we are all underestimating Beaumont’s technological savvy and World Rugby will shortly launch a rugby video game that makes Fortnite look as cutting edge as Bagpuss. Let us all hope so because the alternative is too grim to contemplate.

1 Sideline Cut: Vignette shows why Bird is the true shark in The Last Dance
2 Niyi Adeolokun and Tom McCartney among Connacht departures
3 Brendan Rodgers says he was ‘really knocked’ by coronavirus
4 Anfield and Cheltenham show sports again lacking in looking after their own
5 Farrell and O’Connell provide insight into changes in Ireland’s analysis
Real news has value SUBSCRIBE