Edinburgh set to put Leinster to the test in entertaining clash 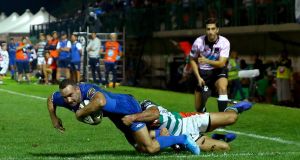 Dave Kearney of Leinster scores one of his hat-trick of tries against Benetton at Treviso on September 28th. Photograph: Matteo Ciambelli/Inpho

Dave Kearney, who scored a hat-trick of tries against Benetton in the opening Guinness Pro14 game of the season, returns to the starting team having missed last weekend’s 53-5 win over the Ospreys, one of three changes from the latter match.

Max Deegan is named at blindside flanker while another St Michael’s College alumnus, Scott Penny, will wear the number seven jersey. Indeed, the victory over the Ospreys was marked by another Leinster player scoring three tries, on this occasion hooker Ronan Kelleher.

This contest marks a tussle between two clubs who are second in their respective conferences and have both started the season unbeaten and in some style. Hugo Keenan gets another opportunity to nail down the fullback role, while there is continuity in the centre and halfback partnerships, while James Lowe is again on the left wing. Scott Fardy will lead the team in an unchanged front five in the pack.

Edinburgh enjoyed a fine win away to the Cardiff Blues last time out, having opened the campaign with a rout of Zebre in Murrayfield. Jamie Hodgson and former Fijian Sevens player Mesulame Kunavula replace the injured Fraser McKenzie and Lewis Carmichael in the only two changes from the victory in Cardiff.

Any team under the coaching baton of Richard Cockerill will possess integrity in terms of rugby values. This is a good test for a Leinster side that offers an amalgam of experience and youthful endeavour and dash, and promises to be an entertaining evening, after which both Cockerill and Leinster’s head coach Leo Cullen, friends from their days at the Leicester Tigers, will learn a little more about their respective playing groups.