David Hawkshaw's hurling roots stand to him on rugby pitch 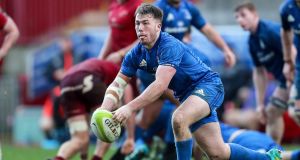 The most pressing concern for David Hawkshaw during his sporting childhood was to pick up the correct kitbag on the way out the door. Rugby and hurling vied for his affections and he excelled at both, playing for the Dublin minor hurling team and the Ireland schools rugby side.

Inevitably a choice had to be made. In October 2016 he played his last competitive game of hurling, for St Brigid’s in a Dublin senior championship quarter-final against the current reigning All-Ireland club champions Cuala, who would go on to win the national title that season.

His memories of the game are slightly vague. “I think I came on in midfield. I am not too sure who I was marking; I was on David Treacy for a bit but I was taken off him pretty swiftly. He was doing a job on me. I tried to play it [hurling] for as long as I could.

“It was tough but I was passionate about sports and I loved both. I have a few of the GAA coaches to thank a lot, the likes of [St Brigid’s coaches] Keith Barr, Johnny McGuirk, two past Dublin players; they put a lot of work into me in previous years that helped me a lot with the rugby.

“It was very easy to go to the sessions and play games when you were enjoying going to them. The body would have been a bit sore by the end of the week. I was lucky enough to be selected with the Dublin minors as well.”

There is not a well-trodden path between the sports at elite level. Former Ireland prop Ned Byrne won an All-Ireland hurling title with Kilkenny in the 1970s and ex-Ireland scrumhalf Tomás O’Leary captained Cork to win the minor title, while current Munster and Ireland winger Darren Sweetnam played senior hurling for Cork as a teenager in 2012.

That Hawkshaw has been named as Ireland captain for the upcoming Under-20 Six Nations is recognition of the person and the player.

His rugby pedigree is impressive: the starting outhalf in fourth year on the Belvedere team that won the Leinster Schools Senior Cup in 2016; wearing the number 10 jersey again when the school retained the title in 2017, and then in his final year captaining Belvedere to a final, where they lost to Blackrock.

He found the crossover between rugby and hurling beneficial and never viewed the dual commitment as counterproductive until time constraints no longer permitted him to play both sports. “It is little things like movement and the pace off the mark [that applied to both]. The aggression would be a big thing. I would like to say I have a bit in me. It was more of a learning process for me playing both, especially in the later years.”

His earliest rugby memories are happy ones in Coolmine, before playing the game at school in Belvedere and latterly in Clontarf. The possibility of enjoying a professional career in rugby was influential in his final choice of sports. “Yeah, I would have thought of that [making a living] in the decision. It was hard to let go of the hurling as well but at the end of the day the decision had to be made.”

He doesn’t have far to look for inspiration. His friend and former team-mate at school Hugh O’Sullivan has already made his senior Leinster debut, having played for the Irish Under-20s last season. “Hugh is a different class; he is someone I would have looked up to [from] first year, once I got to know him.

“His attitude to the game and the way he conducts himself is just top class. He deserves it; he’s been absolutely flying this year and had a great year last year with the 20s. There is always someone there that you want to chase and I’m just delighted to see him up there.”

Hawkshaw played outhalf at school but is more likely to start at inside centre for the Irish team. Once he’s playing, he’s happy and doesn’t express a preference. “It’s just about knowing the structures, knowing the shapes, and getting the confidence up in either position and being ready to go then.”

First up for Ireland in their new home of Musgrave Park in Cork is a game against the beaten finalists in last season’s World Rugby Under-20 Championship, England. Likely to be among the visiting contingent, who have a reasonable number returning from last year’s group, is outhalf Marcus Smith, who has been in the Harlequins first team since he was 18.

Hawkshaw admitted: “Marcus is an incredible player. I think [some of] the boys played him at Under-18s in Wales and he was very good then. Taking on teams like England and players like that you want to judge yourself against the best.”

And that is the ultimate benchmark for anyone, irrespective of the choice of sport.