Irish Times Fantasy Rugby: who to pick in your XV 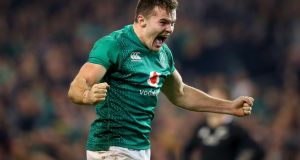 The jewel in the crown of northern hempisphere rugby - the Six Nations - is nearly upon us.

Over six weeks familiar foes will renew old rivalries in a bid to be crowned championship winners on Saturday March 16th.

Ireland remain strong favourites to retain their title, after a vintage 2018 which saw them follow-up the Grand Slam with a November victory over the All Blacks.

But it’s not just Ireland who could be enjoying the sweet taste of victory in March.

Indeed, you have the chance to prove you’re the next Joe Schmidt, Warren Gatland or Eddie Jones by taking part in the Irish Times Fantasy Rugby competition.

With a €100 million budget, and 15 players to pick, deciding who makes it into your winning XV isn’t straight forward.

So here, we’ve attempted to pick a side which could lead you to Fantasy Rugby glory - good luck!

Leigh Halfpenny’s ongoing absence with a head injury means Williams is set to be Warren Gatland’s first choice fullback. The Saracens 15 is a running threat from deep with an eye for the try line.

May was an ever-present for England in last year’s tournament, playing everyminute of the tournament and scoring four tries to boot. He was the outside back with the second-highest points tally in 2018.

Fickou has been a player reborn since leaving Toulouse for Stade Francais last summer. He has scored seven tries in the Top14 so far this season and at the price could prove a bargain.

Competition in Irleand’s midfield is fierce but Bundee Aki is likely to start at 12 against England. A tireless carrier and tackler he is also a try threat, crossing the whitewash twice last year.

Last year’s highest-points scorer is only getting better, and he now has a staggering 12 tries in 13 Test matches. He scored seven tries in the 2018 tournament - you can’t leave him out.

The most expensive player in the tournament alongside Johnny Sexton, Farrell gets the nod simply because he’s likely to play more minutes than the irish 10. Makes a huge amount of tackles and kicks a lot of points.

A steady presence at scrumhalf, Laidlaw gets the nod on account of his goal-kicking. With Scotland’s exciting backline, there could be a lot of tries to convert.

A bolter for the side, Bamba has only made one appearance for France. However, should the 20-year-old get chances off the bench his devastating running and speed around the park could be fruitful.

The Italian hooker was the second-highest points scorer in last year’s competition, largely on account of the massive 60 tackles he made - an average of 12 per game.

Furlong’s all round game - particularly his tackling, running and offloading ability, make him a shoo-in for this side.

The Welsh warhorse also made 60 tackles in last year’s tournament, and is a thorn in the opposition’s side at the lineout.

Jonny Gray made an astoshing 100 tackles in the 2018 Six Nations - 20 clear of second-placed Hamish Watson.

Tackling, turnovers and pilfering the oppositions lineouts earn the Munster backrow his place in the XV.

Navidi made 75 tackles last year and is also an athletic ball carrier. Injuries in the Welsh backrow mean he is a likely starter in the opener at the Stade de France.

This could be Parisse’s final Six Nations, but he not just a sentimental pick. His tackling, carrying and offloading ability all make him dangerous even 35-year-old.

How the scoring works:

You can sign up to The Irish Times Fantasy Rugby here.

1 Betting shops face uncertain future as they prepare for Monday reopening
2 Ian O’Riordan: An education in race and running during college days in America
3 Mature Ringrose keeping the ups and downs of rugby life in perspective
4 How a GAA club sprang up in east Belfast over Sunday breakfast
5 GAA confident that crowds will play a part when intercounty action resumes
Real news has value SUBSCRIBE