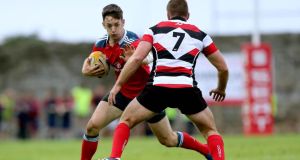 Munster coach Anthony Foley has named a team with an extended list of replacements for his first game in charge of the province, the pre-season friendly against Gloucester at Kingsholm on Saturday (3.0).

There are potentially 11 players in line to make their senior debuts in a team that will benefit from the presence of the experienced Donncha O’Callaghan and BJ Botha.

In the frontrow Alan Cotter and BJ Botha pack down on either side of Ger Slattery. The Young Munster club player made his competitive debut for Munster against Connacht in December 2013 and claimed his first points when scoring two tries against Zebre the following February.

O’Callaghan, Munster’s most capped player, will captain the squad and he lines out alongside Academy player Sean McCarthy in the second row.