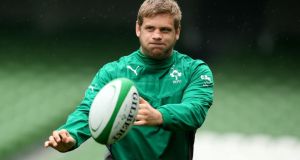 Ulster officials remain optimistic that Chris Henry will make a full recovery after undergoing heart surgery on Monday although, understandably, the flanker’s return to full health remained his and their priority for the foreseeable future.

The recently appointed Ulster manager Bryn Cunningham confirmed yesterday that Henry had undergone an operation, with an IRFU statement subsequently adding: “Chris is recovering from a procedure to repair a defect in his heart wall. This was found to be related to his recent episode and has been performed to prevent further issues.”

The 30-year-old Henry had been in line to win his 17th cap against South Africa in the first of the Guinness Series at the Aviva Stadium before falling ill on the morning of the match. Following further tests, the IRFU revealed that Henry had suffered a “temporary blockage of a small blood vessel in his brain”.

“We’re waiting for the medical staff to give us an update,” said Cunningham. Henry’s immediate priority would be “getting back to full health”, according to Cunningham, who added: “If he gets back to playing professional rugby that will be fantastic. That’s certainly what we are hoping for.”

In a similar vein, Ulster’s chief executive Shane Logan said that the Province was now “more optimistic than we were a week or two ago” about the likelihood of Henry making a return to professional rugby.

“He is a resilient guy. He’s come back from a pretty major neck injury which you would think would be of more concern. He has come back from that and had no problems. It is just about managing it and doing the best for him. It wasn’t worth taking a risk. On another given day with a different individual, we might have taken a different course of action. But, we’ve been conservative with Lukey.”

“If you play rugby, it is an occupational hazard,” admitted Cullen regarding the prevailing threat of retirement. “It is probably something you always have at the back of your mind because it’s a tough industry. That is the reality of the game. Eoin O’Malley is not in the game anymore because he’s retired. He got one knock. Everyone would have said he’s the most likely guy to be Brian’s replacement if you wind the clock back five or six years ago and he was retired before Brian.”

Shane Jennings (hamstring) and Fergus McFadden (ankle) are inching closer to a return but remain sidelined, as do Cian Healy, Seán O’Brien, Marty Moore and Ben Te’o until “after Christmas and beyond”. There is “no general rule” regarding those Irish front-liners who started against Australia and South Africa returning this Saturday at home to Guinness Pro12 leaders the Ospreys, although the likelihood is that Seán Cronin, Eoin Reddan and Ian Madigan will come back into the mix, with the latter likely to start at out-half.

Having drawn with the bottom-placed team last Sunday, Cullen said: “Ospreys are a totally different proposition. Top of the league, and every time we play the Ospreys, even though they might be missing a couple of bodies from Wales, it’s going to be the same with us realistically. We’re going to be missing bodies as well.