London, Cardiff, Edinburgh and Dublin could be venues if leaders approve of plan 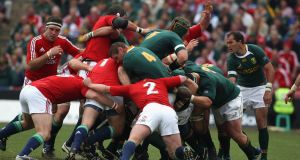 A final decision on this summer’s British & Irish Lions tour will be taken by the end of March with officials increasingly keen to host it on home soil in front of live audiences. Tentative plans are also in place to expand the eagerly-awaited series against South Africa to four Tests in July and August.

While the possibility of the tour going ahead behind closed doors in South Africa has yet to be formally abandoned, it is understood that idea has now been all but discounted. Lions sources have also confirmed that governmental guarantees are being sought to cover costs incurred if fresh Covid outbreaks force a delay to the proposed June 21st easing of all lockdown restrictions in England.

Shifting the entire eight-match Lions tour to the northern hemisphere would be a huge logistical undertaking even without the noisy disapproval of those who believe playing it on “home” soil would be sacrilege. The other possibility is to move the entire series to Australia but, once again, that would pose significant administrative challenges.

The Lions board, however, is increasingly confident the tour will proceed this year, with a warm-up game against Japan at Murrayfield on June 26th already in the diary. One idea is for the South African sides involved in this year’s new Rainbow Cup tournament to remain in the UK to provide provincial opposition, leaving four potential dates to be filled by Tests in London, Cardiff, Edinburgh and Dublin.

Not everyone is comfortable, in the current climate, with the idea of taxpayers’ money being used to facilitate a rugby tour but Lions officials have stressed to the government the potential economic benefits to bars, shops and local businesses.

With the go-ahead also required from the Irish Government and the devolved governments of Scotland and Wales, though, it could be that playing in Dublin, where strict restrictions are in place until at least late April, might prove difficult. The practicalities of booking hotels and stadiums, and selling tickets will necessitate a final call within weeks but the increasing prospect of British stadiums being at least partly full for the visit of the world champions is encouraging the organisers to believe that a viable schedule can be agreed.

3 ‘An accident is not a crime’: Tiger Woods will not face charges in crash

5 Tennis’ uncomfortable truth: Djokovic might be greatest of them all