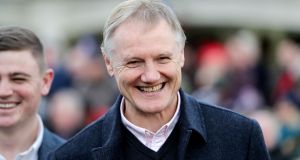 The Joe Schmidt regime with Ireland is looking better and better as time goes on. Photo: Laszlo Geczo/Inpho

There is famously no English language equivalent to ‘schadenfreude,’ that nutritious relish in the misfortune of others. Maybe Joe Schmidt can fill the gap. He could get Arsène Wenger to help him.

The two men know each other. Wenger got Schmidt to address the players at Arsenal back in the day. Schmidt can recall feeling intimidated as the Frenchman stared up at him from the front alongside Giroud & Co.

Soccer’s ‘Le Professeur’ and the Kiwi secondary school teacher who led Irish rugby to its zenith are a likely studious pair. Their careers have been models of intelligence and proportion. Both also serve as a warning about the dangers of getting what you wish for.

Schmidt’s recent Late Late Show appearance from the pandemic Garden of Eden that is New Zealand suggests the grass really can be greener on the other side of the world. He certainly looked in good enough shape to suggest nutrition isn’t a problem. A vindication diet can do that.

This is the coach who transformed Irish rugby over the course of six years in charge of the national team. He turned a team languishing in mid-table Six Nations mediocrity into the world’s No1 side, Grand Slam champions who literally beat everyone, including the All-Blacks in November of 2018.

Less than a year afterwards he stepped down as planned. But it was in unseemly fog of blame and retribution that boiled down to widespread public assumption about the man in charge being a busted flush.

Schmidt was too restrictive and one-dimensional. The game had moved on. The wings of a supposedly gilded generation were being clipped by a dinosaur unable to get the most out of the outstanding talent available to him.

It was a case of thanks but time to go, Joe, and let’s look forward to the brave new future.

If it felt presumptive at the time, such presumption about the grass being greener on the other side of Schmidt looks weird now. Going into next weekend’s tie with Italy the very things lacking from the Irish set up are what Schmidt specialised in.

Framework, structure, a clear and defined game-plan, all the stuff he was damned for focussing on, all of which serves to underline how Ireland appear a sight worse in their new future than they were under the supposed relic.

Even by Irish rugby’s bipolar instincts, where everything and everyone is either amaze-balls or atrocious, it has been an emotional rollercoaster with one likely outcome being nostalgia for the Schmidt era.

The man himself has always appeared too gracious to rub in the consequences of such presumptive entitlement to those who happily waved him goodbye. But he is at least entitled to a private serving of what his French friend might refer to as ‘Joie Maligne.’

Wenger too was dismissed as old hat when he got elbowed aside at Arsenal on the back of 22 years that saw him transform the face not only one of the game’s most famous clubs but of English football generally.

The man who built ‘The Invincibles’ injected a sense of style and sophistication into teams that always aspired to more than just ‘gettin’ a resul.’

That he managed it with a personal ease at odds with Alex Ferguson’s continual chippiness or José Mourinho’s relentless self-promotion made it even easier to appreciate Wenger. Yet by 2018 he too was old hat.

Having secured a top four position for 20 consecutive seasons Wenger’s failure to secure Champions League qualification got him the elbow. So did claims that he was too much of a purist, not enough of a ruthless winner. The Gunners deserved better than just top four - ‘Wenger Aht!’

The Frenchman has since admitted to regrets about the 22 years he devoted to Arsenal and ventured that he may have outstayed his welcome. But what it has really proved is how fickle fans are and how desire for novelty risks taking for granted what they’ve already got.

There are obvious parallels to what’s happening in Kilkenny hurling right now. In the absence of action focus has turned to what once would have been unthinkable – speculation about Brian Cody’s position as manager.

The teacher with 22 years in charge under his belt – and 11 All-Ireland titles – is peerless in terms of success. Yet his ratification for another year was accompanied by grumbling about a new voice being required to freshen up the Cats.

They might not be as brazen about it as Kerry in football but five years without an All-Ireland has provoked Kilkenny’s sense of hurling entitlement.

No matter that the county hasn’t won a minor All-Ireland since 2014, or an under-21 or under-20 crown in a dozen years, it appears the presumption is the players are good enough if they wear black and amber and so a shake-up is needed at the top.

The game has evolved, moved on, left Cody behind in terms of structures, conditioning and machines that go ‘ping.’ The man who has fearsomely strode the sideline for decades might even have simply got lucky with the players at his disposal before.

It’s neat and topical and panders to that instinct for the new. It also makes a virtue of change for its own sake.

There’s nothing original in pointing out how newness is no virtue and oldness is no vice. Yet almost invariably the reaction in sport is to ditch the wily old bird in the hand for the promise of what might be in the bush.

Maybe Cody can come up with an Irish word for it.