World Rugby drawing up plans to save nations from financial collapse 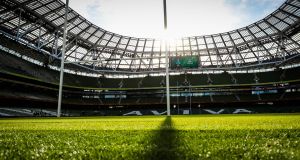 World Rugby is examining the financial accounts of tier one unions to decide which countries are worst affected by the Covid-19 crisis. The €180 million profit from last year’s World Cup could be part of a rescue package.

At present, the Irish Rugby Football Union (IRFU) is not in this category but failure of rugby to return by September would place the game on this island under threat.

With Test matches generating most of the sport’s revenue, World Rugby contingency plans have been drawn up for the July tours of the southern hemisphere – Ireland are scheduled to play Australia twice – with the ideal scenario being a move to August.

Should the coronavirus deny this, a second plan would alter the nature of the November internationals that traditionally take place in Europe.

“We are intensively examining scenario planning for the July internationals,” said the World Rugby chairman, Bill Beaumont. “We will be working in full partnership with key stakeholders to explore potential appropriate actions. Only by working in full partnership with our unions, the professional leagues and international players will we be able to deliver a solution that will reduce the impact of this extraordinary challenge.”

Plan B – presuming all summer fixtures are cancelled – would review the host unions taking all the profit from November. The IRFU are still hoping to reschedule the postponed Six Nations games at home to Italy and away to France before Australia (November 7th), South Africa (November 14th) and Japan (November 21st) visit the Aviva stadium.

Gate receipts from internationals in Dublin are the primary income for the IRFU but World Rugby is looking at a way of sharing these proceeds.

The RFU and the French Rugby Federation only allow the global governing body to speak directly to their professional clubs over player welfare problems, but that has been lifted to ensure Premiership Rugby and Ligue Nationale de Rugby are part of the current dialogue.

“One of the major issues we have is we don’t know when the virus is going to end,” said Beaumont. “But I can assure you we will be working extremely hard to try and get harmony between all countries, clubs and leagues so when we come out of this we will be in a strong position, pulling in the same direction.”

That was not possible last year when the Six Nations failed to unanimously support World Rugby’s proposal for a nations league that would have been worth €6.7 billion over 12 years and provided insulation in the current crisis. The Six Nations unions turned instead to the private equity company CVC with which they remain in talks over a 15 per cent stake for €330 million, money that would now absorb losses rather than be used for investment.

Despite the Guardian reporting that English rugby are expecting to lose up to €55 million in the next financial year, Australia will be down €50 million if the shutdown continues in 2020 and New Zealand would face a shortfall of €66 million, no tier one nation is expected to go out of business.

However, there is severe financial pressure on tier two nations with USA Rugby potentially facing bankruptcy.

While Test rugby will be the priority on resumption of games, the club competitions that will recommence first will be those where no cross-border travel is involved, which gives French and English clubs a better chance of completing their leagues than the Pro14.

Irish rugby is currently looking at losses of up to €10 million.