Rory Best and that day in a Belfast court; McIlroy realising the weight of his words 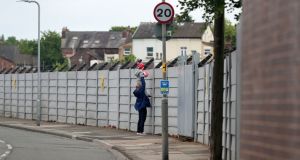 A man holds a child up over a fence to look into Liverpool’s Melwood training ground as Premier League clubs returned to action. Photo: Peter Byrne/PA Wire

It was one of the standout moments from one of the most closely followed trials in the history of this island, but just why did Ireland captain Rory Best turn up at Laganside Magistrates Court on the first day that a girl was giving her testimony alleging she was raped by two of the Ulster player’s teammates? In our Sporting Controversies series this morning, Gavin Cummiskey delves into the circumstances and why the Ireland captain – and teammate Iain Henderson – used a rare day off from Six Nations training to drive to Belfast and evoke the media scrutiny that would inevitably come with their appearance. Also in rugby, Andrew Porter begins his weekly diary today, taking over from Andrew Conway in charting what rugby players are getting up to now that there is no rugby being played. Porter writes that he recently bought a new house and, while lockdown put an end to the decorating, he has his gym equipment with him and is making good use of it.

Moving on and Johnny Watterson writes in his column this morning that Rory McIlroy is now realising the power that his words hold as the number one golfer in the world. The 31-year-old was mildly critical of Donald Trump’s response to the coronavirus crisis in a recent podcast interview but that has very much set him apart from his PGA Tour contemporaries – a circuit where Trump enjoys huge popularity.

In soccer, Emmet Malone writes that Séamus Coleman had a flashback to his younger days when he returned to Everton training this week with all players now required to bring their kit home with them to wash. “I rang my mum on the way home from training and mentioned that – our own kit coming home with us,” he said. “It’s a long time since that’s been done. We used to do it at Sligo Rovers when I still lived with my mum and dad, they remember it well.”

In GAA, clubs remain the focus as the organisation considers its next move in getting back to play. If the number of coronavirus cases continue to remain as low as they are now and potentially drop lower, it may quicken the association’s plans to restart, writes Seán Moran. “If the Government are satisfied to make the next two dates, 8th June and 29th June,” according to one source, “then all bets are off and we are really up and running. That’s a big ‘if’ though and people are underestimating just how big.”

In other news, the Tokyo Olympics face “real problems” being hosted in 2021, according to Australia Olympics chief John Coates. The IOC member says that the hosts must assume there will be no vaccine widely available by July of next year and must plan accordingly.