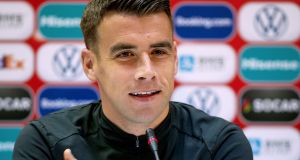 Séamus Coleman returned to training with his Everton teammates this week. Photo: Inpho

The early stages of getting back to training has reminded Séamus Coleman of his days in the League of Ireland with Sligo Rovers, the Everton and Ireland defender has said.

The 31-year-old, who left the Showgrounds for Merseyside more than a decade ago, told his current club’s website that he is delighted to be playing some football again but suggested that having to bring his gear home to be washed brought the memories flooding back.

“I rang my mum on the way home from training and mentioned that – our own kit coming home with us,” he said. “It’s a long time since that’s been done. We used to do it at Sligo Rovers when I still lived with my mum and dad, they remember it well. We did it at Blackpool [where the Irishman was on loan for a spell before establishing himself at Goodison Park] as well.

The arrangements for looking after kit are just one of the many strange aspects about this week’s return to training but, he says: “Getting back, you feel there is some normality coming back to the world . . . that things are progressing.

“You are excited to get back to work. It’s probably the longest I’ve been away from Finch Farm. Driving through [the gates] was a great feeling but it’s definitely a little bit different.

“When you got there, you could see the work that has been put in to make it as safe as possible. We are in small groups and it is serious, we have to do things properly.

“The ideal scenario is we get back playing Premier League football and to do that, as players, we need to make sure we are doing everything right.

“The club made sure of that by telling us the rules and regulations. There are measurements to tell us how far to stay apart and a one-way system around the building, so you are not crossing paths with people. It feels as safe as it possibly can and, hopefully, we can move to phase two as quickly and safely as possible.”

Robbie Brady, meanwhile, is among the Irish players back in training at Burnley and the club announced on Thursday that it has activated its option to extend his contract with the club by a year.

The Dubliner, who signed for £13 million in January 2017 and had one goal in 15 appearances before the season was suspended, should now be at Turf Moor until at least the summer of 2021.

Fans in Ireland have come out narrowly in favour of the Airticity League resuming behind closed doors in a poll conducted by the Irish Supporters Network.

Almost 53 per cent of respondents said they would be happy to see the league resume in empty grounds given the circumstances, while 65 per cent said they would accept a ban on away fans until social distancing restrictions have been lifted. More than 80 per cent of those asked said the supporters should be involved in the current discussion about whether or not the league should restart.

Those talks continued on Thursday but final details of the package of supports the FAI intends to provide to clubs are not now expected to be provided until early June and so no decision is expected until at least then.