Jim Bolger’s incendiary statements should shake racing to its foundations 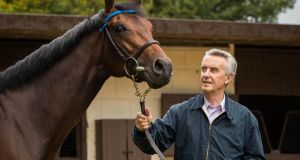 It’s six weeks since Jim Bolger declared drugs to be Irish racing’s number one problem. He doesn’t believe there’s a level playing field. These are incendiary statements from one of the sport’s grandees and should shake racing to its foundations.

One of the greatest trainers in the history of the sport here believes drug cheats are getting away with it.

So cue an existential crisis, right? Perhaps a glut of introspection or even recrimination? Or at the very least feverish speculation about how best to save the reputation of a sector long a symbol of Irish sporting excellence?

The credibility of a government backed industry worth billions, and employing thousands, has been questioned by one of its leading figures. At the very least the validity of Bolger’s claims would seem to require being publicly thrashed out.

Just imagine if Brian Cody said performance enhancing drugs were rife in hurling. Or Leo Cullen claimed Leinster rugby wasn’t competing on a level playing field due to doping. The impact would be seismic, the public debate all-consuming.

But not a bit of it. Six weeks later and rather than sound and fury there’s been little more than furtive silence. True to form, a sport and industry has obeyed its instincts and hunkered down to ride out the storm.

Bolger got heard but apparently there’s nothing much to see here. Horse Racing Ireland said it’s a regulatory matter and referred to the Irish Horseracing Regulatory Board. The self-elected body formerly known as the Turf Club flung around spotless testing statistics which reassured only those anxious for reassurance and its top officials stayed notably mute.

If Bolger’s aim was to generate a conversation about drug testing in racing then it isn’t a very public one.

Colleagues of his passed the buck to the Trainers Association - of which Bolger too is a member - and it declined to comment.

Even privately there is reluctance to discuss this. An issue of fundamental importance to the sport’s credibility appears to have got dismissed as an embarrassing example of one of their own peeing inside the tent. Bolger might be off a few Christmas card lists this year.

Since he’s a rather thorny figure, rarely concerned about being top of the handicap in any popularity stakes, Bolger is unlikely to lose sleep over that.

Invariably there were a few grumbles that he shouldn’t toss around accusations without backing them up. But since naming names in such circumstances is a high-speed shortcut to the High Court it’s a pretty empty demand.

However, the fact such a high-profile figure as the man who saddled New Approach to win the 2008 Epsom Derby is frustrated enough to speak out testifies to the gravity of all this. Because racing figures buck the traces like this practically never. Whatever’s in the tent usually stays firmly in it.

Of course the comparative lack of public reaction could be just down to low expectations too. Doping in the GAA or rugby is news. Racing’s stereotype is more like it’s going on all the time anyway and everyone’s still betting so why sweat.

The reality is much more nuanced. The medication minefield here is nothing in comparison to the badlands of US racing. Anti-bleeding drugs are used there even on race-days despite their capacity to also serve as masking agents.

When it comes to doping Irish racing cannot afford to continue indulging its instinct for inertia. Dismissing dissent is a reflex that ultimately won’t do it any good

There is also the reality that other racing jurisdictions around the globe are playing catch-up too. As with every sport the fight against doping is always evolving. If the rewards are big enough there will always be cheats.

No other racing country, however, has as much at stake in taking the fight to them, and being seen to do so. This small island is the third biggest producer of foals in the world. A couple of billion a year is generated by racing and breeding. Up to 16,000 jobs are directly linked to it. It’s reputation is vital.

If the implications of Brexit is an immediate issue for racing, as is continuing to ride out the coronavirus storm, there is also a sense of both being to a large extent out of the sport’s hands. Tackling the drugs threat isn’t. Yet a chronic lack of urgency appears to exist.

Bolger’s comments haven’t come out of nowhere. There is abundant and sorry evidence over the last decade of drugs scandals in Irish racing and official complacency in response.

It is nine years since Department of Agriculture officials raided Philip Fenton’s yard and found anabolic steroids. Shortly afterwards commercial quantities of the anabolic steroid, Nitrotain, were found at the home of the former vet, John Hughes, brother of trainer, Pat Hughes.

As a result a cross-industry anti-doping task force recommended all of five years ago that a system be implemented to allow traceability of thoroughbreds throughout their lives, whether in training or not, which should be a fundamental requirement of any effective drugs regime.

That system is still not in place. There have been steps taken towards it but the pace of change has been glacial. It has often appeared that the focus has been instead on bitter internecine feuding and a grim failure to see the big picture.

It’s a context that means Bolger’s attempt to jolt the system shouldn’t be dismissed. When it comes to doping Irish racing cannot afford to continue indulging its instinct for inertia. Dismissing dissent is a reflex that ultimately won’t do it any good.

Bitter experience suggests it is delusional to assume the sector here doesn’t contain some prepared to cheat. That Irish racing has more to lose than almost anyone else by not being on the front foot in tackling them is obvious. Yet it still appears to be dragging its feet.

Pointing that out does not let the side down. What does is circling the wagons and focussing on keeping the best side out rather than bluntly addressing the substance of how best to make sure the game is clean.