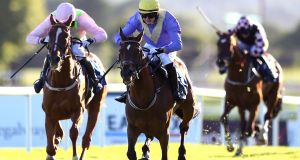 Uradel, with Aubrey McMahon on board, comes home to win the valuable qualified riders handicap at the Galway Festival. Photograph: James Crombie/Inpho

Willie Mullins is responsible for five of the seven Irish-trained entries for the Betfair Hurdle at Newbury on February 9th.

The champion trainer’s potential team includes Uradel, who enjoyed a fine campaign on the Flat in 2018, winning the valuable qualified riders handicap at the Galway Festival before being touched off by stablemate Low Sun in the Cesarewitch at Newmarket.

The eight-year-old would be an interesting contender if returning to the jumping game in Berkshire early next month.

Mullins has also given the option to Dolciano Dici, Cut The Mustard, Sayar and Saglawy.

Gordon Elliott’s High Expectations and Jessica Harrington’s Jetez are the other potential raiders.

Al Dancer is set to put his unbeaten record over obstacles on the line for Nigel Twiston-Davies. The six-year-old has won each each of his three starts this season, scoring at Carlisle and Ffos Las before dominating his rivals in handicap company at Cheltenham last month.

Twiston-Davies has won the Betfair Hurdle twice in the last five years with Splash Of Ginge (2014) and Ballyandy (2017) and that pair are also part of a potential five-strong team in this year’s renewal along with Ballymoy and Mr Antolini.

Twiston Davies said: “We do try to have runners in the Betfair Hurdle as it is a nice race to win. Al Dancer is being aimed at the race. It’s become a good race for horses that have not quite been caught [by the handicapper].

“John Neild wanted me to enter Splash of Ginge. If it became very soft he could run and we could possibly run Ballyandy as well, so we could have two of our former winners there.”

Al Dancer would be the probable mount of jockey Sam Twiston-Davies, son of Nigel, who steered Ballyandy to his win at Newbury.

“He’s a novice who has done well so far this season,” said Twiston-Davies junior. Going into a handicap like this would be good experience for him. The long-term dream is that he will be good enough for the Supreme Novices’ Hurdle at Cheltenham and the Betfair Hurdle will tell us exactly where we are with him.”

The Twiston-Davies quintet were among a total of 55 entries for the £155,000 contest.

The sponsors make the Paul Nicholls-trained Challow Hurdle runner-up Getaway Trump the ante-post favourite at 8-1, with Al Dancer next in the betting at 10-1 along with Olly Murphy’s Thomas Darby.

Other leading hopes for the home team include Monsieur Lecoq (Jane Williams) and Didtheyleaveuoutto (Nick Gifford).