Unbeaten pair set to defend their spotless records at Fairyhouse 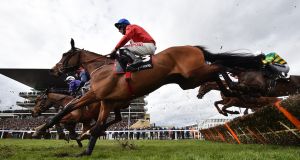 Envoi Allen and Honeysuckle put their spotless records on the line at Sunday’s Grade 1 Winter Festival programme in Fairyhouse.

Unbeaten records might be there to be broken but, even behind closed doors, a widespread sense of deflation will occur if either gets beaten on the first multiple Grade 1 card of the season.

Jumps fans are suckers for a top mare, and Honeysuckle’s perfect eight-from-eight record includes a Cheltenham festival success, so it’s little wonder she’s one of the most popular horses in training.

However, if there’s one thing that can grab the imagination even more, it’s the thought of the next great emerging talent – which is where Envoi Allen comes in.

In nine racecourse starts the ex-point-to-pointer is undefeated and in reality hasn’t looked close to being beaten.

One brief moment after the penultimate flight in last season’s Ballymore at Cheltenham did suggest vulnerability, but the way Envoi Allen ultimately established his superiority indicated reservoirs of ability that make him the sport’s most exciting young talent.

The hazardous nature of the game suggests his streak might smack more of Arsenal’s undefeated 49-match Premier League run than some ultimate undefeated Rocky Marciano-style record.

But for the moment Envoi Allen appears pretty much invincible and a “perfect 10” looks his for the taking against only three opponents in the Bar One Racing Drinmore Novice Chase.

Envoi Allen has won at the last two winter festivals, although his course record pales in comparison to Honeysuckle’s.

Five of her eight victories have come at Fairyhouse, including last year’s Hatton’s Grace Hurdle which she tries to win again on Sunday.

Unlike 2019, this will be her first start of the season, but she is still likely to be a warm order to emulate stellar names such as Istabraq, Solerina and Apple’s Jade by winning the €100,000 highlight more than once.

The 7lb mares’ allowance always made Apple’s Jade hard to beat during her three-year domination of this race and Honeysuckle’s half-a-dozen male opponents face a similar mountain to climb.

Ratings suggest Honeysuckle doesn’t require any allowances against this opposition. But if there is one to shake her up then the progressive Fury Road, with a run under his belt this season, looks it.

As well as Envoi Allen, Jack Kennedy can also look forward to the third likely Grade 1 hotpot on the Fairyhouse card, Ballyadam, in the Royal Bond Novice Hurdle.

Ballyadam can’t boast an unbeaten record, having been surprisingly defeated in a bumper last winter.

However, for a former point-to-point winner, he looked a notably quick recruit to hurdling when making a winning debut over flights at Down Royal a month ago.

At a purchase price of £330,000, Ballyadam is another of Cheveley Park’s expensive National Hunt purchases, and looks one that could out-pace his opposition when it counts.

Sunday’s most valuable contest, however, is the Porterstown Handicap Chase which, along with the Troytown, had its prize fund boosted to €125,000 to compensate for the loss of this year’s Irish Grand National.

It will be a serious stamina test on soft ground and the 7lbs that Jack Foley can claim off Chavi Artist could be a major plus to his chance.

The in-form Willie Mullins unveils another exciting French recruit in Saint Sam, who lines up for Sunday’s Grade 3 Juvenile Hurdle.

He has to concede weight all round on his Irish debut, having won twice over jumps during the summer.

That may prove difficult against a couple of local three-year-olds, especially Druid’s Altar and Zanahiyr. The pair have flat form during the summer but Druid’s Altar impressed on very testing conditions at Punchestown last time.

The Albert Bartlett hero cost Rich Ricci £235,000 after winning a point-to-point in 2018 and has always looked a type to thrive over fences.

Concertista was another Cheltenham festival winner for the Willie Mullins team last March, sluicing up by a dozen lengths in the mares’ novice hurdle.

She returns to action in a Grade 2 on Saturday, renewing rivalry with Minella Melody, who started favourite for that Cheltenham contest.

Minella Melody has had a run already this season behind Beacon Edge at Galway, although Concertista was so impressive in her last start that she’s hard to oppose.

The jockey, whose four rides at Newbury on Saturday include Copperhead in the Ladbrokes Trophy, has three mounts to look forward to at Fairyhouse including his old ally Supasundae in the Hatton’s Grace.