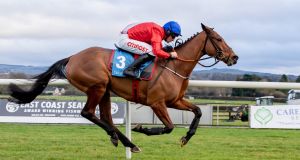 Davy Russell is looking to the New Year to make his return from the serious neck injury he sustained last month.

The triple-champion jockey said on Monday he had “dodged a bullet” after fracturing and dislocating vertebrae in a fall at the first fence of the Munster National in Limerick.

Russell is currently recuperating at home in Youghal after coming close to the sort of disaster that puts in context missing the ride on Envoi Allen at Fairyhouse this Sunday.

Ordinarily the 41 year-old could be looking forward to Sunday’s star attraction as well as another enviable Grade 1 spin at the ‘Winter Festival’ on board Ballyadam in the Bar One Royal Bond Novice Hurdle. However Russell is resigned to a lengthy spell on the sidelines having sustained one of the most serious injuries in his stellar career.

The Gold Cup and Grand National winning jockey endured a horrific spill from Doctor Duffy at Limerick that was worse than originally thought and concerned a number of vertebrae.

“It was C6, C7 and T1. The T1 was dislocated. They put me in traction and that was horrific. They drilled bolts into my head and hung a weight off my head to stretch it so the T1 would go back into place.

“Every hour they would take an X-ray and add more weight. I was telling them ‘lads this is wrong, I’m in woeful pain.’ They were asking where and I was saying the groin and hip area. They said once it’s not your neck, you’re fine,” Russell said.

“They operated on it, sent me home and everything is going fine. There are no complications. I’m in no pain. I’m due back on December 17th and hopefully they will be able to take the (neck) brace off and then I can start back,” he added.

Russell is looking at the New Year for a possible return and will miss out on the busy Christmas calendar for the first time he can recall.

“I’ve asked them (doctors) very little questions. What I asked is can they fix me and they said they can. I didn’t really get into it with them after that. I know nothing about operating so once they’re happy, I’m happy.

“I’d like to be back next week but I’m going to make sure there are no complications. I’ve broken bones in my back but nothing to that extent.

“The pain lasts a small length of time, then it’s about recuperation. I’ve no effects from it. It doesn’t bother me. I’m in no pain. It’s just another broken bone. I know it was a very close one and I dodged a bullet. (But) it’s still just a broken bone,” he said.

The popular jockey even pointed to a silver lining from the painful traction experience.

“For the last 10 years I’ve had to roll out of bed most mornings in pain with my hips. It was embarrassing for a couple of years in that I’d have to ride a bit longer than I normally would because I’d be in fierce pain.

“I had physio after physio and it was very good and effective but it would always return. But I’ve had no pain in my hips since they did the traction - so where there’s a negative, there’s a positive!” Russell said.

He intends to adopt a similar perspective on Sunday’s ‘Winter Festival’ action when perhaps the most exciting jumps horse in the country, Envoi Allen, makes just his second start over fences in the Drinmore Novice Chase.

Russell was successful on the Gordon Elliott trained star at the meeting a year ago in the Royal Bond and rode him to all four of his victories over flights last season including the Ballymore at Cheltenham.

However injury meant Jack Kennedy stepped in for Envoi Allen’s smooth winning debut over fences at Down Royal last month.

“There’s nothing I can do. It would be different if I’d done something stupid, got suspended and I’m below in Youghal head-butting the wall when I should be above in Fairyhouse.

“You get injuries. I’m 41 years of age. I’m a grown man now. You deal with these things and hopefully they will all be there when I get back.

“Gordon has been brilliant and so have the owners (Cheveley Park Stud) in keeping in touch. Let’s hope the work I did before the injury will stand to me after the injury,” he said.

One thing Russell feels shouldn’t impede Envoi Allen on Sunday is a lack of experience over fences going into Grade 1 company.

“He coped well last year when he went straight from a maiden hurdle to Fairyhouse. It wouldn’t be a concern to me from a riding point of view because I know how good he is to jump and how professional a horse he is and the ability he has is massive,” he said.

“It’s hard to talk about a horse like him because he’s exceptional. Whether it (lack of experience) will matter to him, I don’t know. It hasn’t in the past.

“He’s been to all the big dogfights before. He won a point to point and spent his younger days over fences. I’m sure the majority in the race will have limited experience too. But I’d be surprised if any of them has the ability he has,” Russell added.

Aston Villa pile more misery on Steve Bruce and Newcastle 22:22
Leinster and Larmour leave it late to break Munster hearts 22:04
Cheltenham run out of legs up the hill as Man City escape shock for the ages 20:08
RTÉ reveal Young Sportsperson and Manager of the Year nominees 18:22
West Ham rout Doncaster Rovers to set up tie with Man United or Liverpool 17:24