Yorkshire Oaks could be next up for convincing Curragh Classic winner 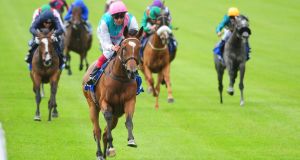 “The English handicapper might have a different story but my feelings is she stays on the 121 she got at Epsom. I don’t think she had to improve on that to win on Saturday. Having said that she can only beat what’s put in front of her and she did trounce them,” said Garry O’Gorman.

That mark is 1lb superior to the Derby-winning colts Capri and Wings Of Eagles leaving Enable to earn comparison to some modern filly greats.

“Enable is the top middle distance three year old in Europe right now although I think that might be a reflection of the low level of the colts.

“But she is a top class Irish Oaks winner, up there with Ouija Board and Peeping Fawn. From a handicapping point of view it would be a huge help to have her race against colts and older horses because in many respects you don’t know how good they are until they’re beaten,” O’Gorman added.

Such a test could come in the upcoming King George VI & Queen Elizabeth Stakes at Ascot although Enable’s connections appear to favour waiting for the Yorkshire Oaks instead.

“The King George is less than two weeks away so it may come a bit soon but obviously we’ll have to look at it,” said Teddy Grimthorpe, racing manager to Enable’s owner. “If she doesn’t go there she’ll probably for the Yorkshire Oaks. We’ll take it a step at a time. “

This week’s focus switches to the start of the summer festival season as Killarney’s July festival kicks off on Monday.

The Listed Cairn Rouge Stakes is the first feature and Asking can secure a valuable black type success under Ana O’Brien.

Elizabeth Browning’s Group Two victory on Sunday off a mark of just 92 indicates how dangerous it can be to rely too much on figures in fillies races. However Asking’s 101 still makes an impressive argument in this context.

Ger Lyons’ Lethal Steps overcame an interrupted passage through his Leopardstown debut to win well. He carries the Qatar Racing colours for the first time in the opener and is upped to a mile where he can beat the Roscommon winner Painting Pictures.