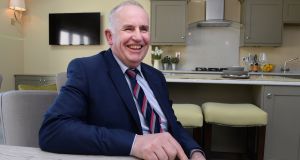 Luke Comer: the high-profile property developer’s licence to train horses was suspended by the Turf Club until the end of July. Photograph: Cyril Byrne

The man brought in to sort out Luke Comer’s Co Dublin racing establishment is confident measures being undertaken will allow the high-profile property developer to resume training at the start of next month.

Comer’s licence to train horses was suspended by the Turf Club until the end of July after a hearing last week when a Referrals Committee panel found he was in breach of five rules and imposed fines of €2,260.

In April Comer was given a suspended six-month suspension of his licence, and fined €10,000, after he refused permission for Turf Club officials to inspect his stables in Kilternan the previous month.

However three inspections carried out at the Kilternan premises in late May and early June revealed issues that were referred by the Turf Club.

Last week the Referrals Committee concluded that breaches included the provision of misleading and false information regarding the location of three horses by Comer’s authorised representatives during an inspection on May 24th when he himself was not present.

They also decided he had failed to exercise adequate supervision of his training operation from January of this year and not put in place any management structure with sufficiently qualified or able staff to carry out his obligations on his behalf.

The rule breaches were described as “major” but the committee adjourned a decision on penalties and costs to assess if Comer’s operation could be put on a proper footing.

They noted Comer had employed Jim Gorman as a trainer and felt it appropriate he be given a chance to address operational matters.

Curragh-based Gorman said on Tuesday: “If they [the Turf Club] came in tomorrow I believe they would be pleased. I would have no fear about that.”

The Turf Club’s chief executive Denis Egan confirmed: “We will be inspecting before the end of July . If there are no difficulties then Mr Comer can go back training after July 31st. If there are any issues then we have seven days to re-enter the matter.”

Last week’s Referrals Committee hearing noted the Turf Club can continue to inspect Comer’s yard at any time on a ‘without notice’ basis. It also adjourned a decision on penalties and costs to early November.