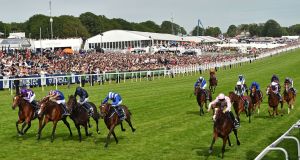 Europe’s racing authorities are examining whether or not the Covid-19 pandemic could force “domestic only” action when the sport is able to eventually resume.

Travel restrictions on racehorses travelling between jurisdictions may have to be applied in the event of racing starting again in different countries.

Such a dramatic step could have the biggest impact of all in Ireland where major operations such as Aidan O’Brien’s Ballydoyle team might not be allowed take horses to major meetings such as Royal Ascot and the Epsom Derby.

There is currently no racing in Europe with the sport in Ireland stopped until at least April 19th although the sporting ban here is widely expected to be extended beyond that deadline.

British racing is cancelled until at least May 1st, the day before the 2,000 Guineas at Newmarket is due to take place.

Horse Racing Ireland’s chief executive Brian Kavanagh is playing a major role in talks on the matter in his role as chairman of the European Pattern Committee.

“There’s nothing definite but certainly talking to other racing authorities internationally the idea of domestic only competition is something that is on their minds. It may be something that is a requirement.

“If that were to happen Ireland would be the country that suffers the most because if you look over the years we send horses to run overseas much more in relative terms than either Britain or France.

“A lot of the time Irish horses underpin the ratings of top races in Britain and France.

“I know overseas mares are coming to visit Irish stallions at the moment but under very strict and restrictive conditions.

Allowing only horses trained in a particular country to take part in races there would have a huge impact on the sport’s most prestigious international events.

It opens the prospect of next month’s Irish Guineas races for instance being restricted to horses trained in Ireland should racing have started again here by then.

There would also be huge ramifications for the sport’s vital pattern system which determines the best and most valuable races throughout the continent.

“If you had domestic only races, technically they would be restricted races which pattern races aren’t supposed to be.

“So you would have to take a view whether you disregard the detailed rules for the year and take ratings of the races as you find them, or whether you would run the races without grading this year, or other options,” Kavanagh said.

The Group status of races is judged by a rolling average of handicap ratings taken over three years.

“It may be the case that rather than downgrading races you would ignore 2020 ratings altogether.

“That depends on how long the hiatus would go on for and you would have to talk to sales companies and cataloguing and standards people about whether they would be prepared to accepts gradings based on certain restrictions that might be applied this year.

“They are all only discussions at the moment. There is nothing hard and fast. It’s all evolving very quickly. But I do know this is something under consideration in other countries as well,” he added.

1 Ken Early: Liverpool fans, Bamber Gascoigne and a close shave in Istanbul
2 Tiger shines and Brady bites back as charity match proves an enjoyable release
3 Sideline Cut: Vignette shows why Bird is the true shark in The Last Dance
4 The Offload: Philip Browne’s grave outlook should be taken seriously
5 How Mary Pierce stepped into the light and played for herself
Real news has value SUBSCRIBE

World Rugby study advises removal of reset scrums to reduce Covid-19 risk 19:42
EFL could introduce artificial crowd noise in behind closed doors games 19:24
Trainer Halford eyes up Guineas glory with Sinawann and Ridenza 19:01
Hogan sees Macgiloney and Cafe Con Leche as Galway Festival challengers 17:39
How Mary Pierce stepped into the light and played for herself 17:00
Here is your handy guide to sport on television this week