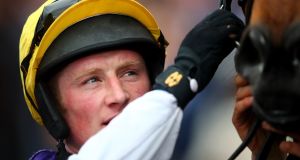 Jumps racing is set to resume in Ireland on June 22nd following the coronavirus shutdown and while Hogan expects to have some runners primed for action, the majority of his team will return in July.

Macgiloney is among that number, having won three times over hurdles and finished fourth on his first attempt over fences in March.

Hogan said: “I’ll have a few ready for June 22nd, but the bulk of my summer jumps horses won’t be ready until July.

“We’ve a few we’re looking forward to, including Macgiloney who was a decent novice hurdler last year and is going over fences now.

“He’s an improving horse and we will be looking to Galway with him.”

Hogan also has one eye on Galway with Cafe Con Leche, who registered two wins in a fortnight before racing was halted in March.

“Cafe Con Leche is another who we might head to Galway with,” said Hogan.

“He won twice over hurdles in March, the second time behind closed doors at Limerick before we stopped racing.”

Galway is scheduled to kick off on July 27th behind closed doors and Hogan is delighted it is set to go ahead.

He added: “I can’t imagine the summer without Galway as it’s just such a big part of our programme.

“You have to hand it to them really as they make a lot of revenue from the crowds there, but it looks like going ahead anyway.”