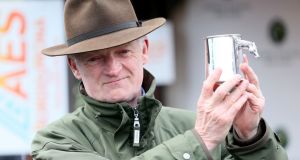 Willie Mullins’s big-race reach will span the Atlantic this week culminating in what he will hope is a fifth French Champion Hurdle success in Paris on Sunday.

The recent Prix La Barka winner Shaneshill is among 16 currently left in the €370,000 Grande Course De Haies d’Auteuil which Ireland’s champion jumps trainer has won in the past with Nobody Told Me (2003), Rule Supreme (2004) and Thousand Stars (2011-12.)

Before that, however, Mullins will be in flat action in New York on Friday night when both Wicklow Brave and Clondaw Warrior line up for the $400,000 Grade 3 Belmont Gold Cup over two miles.

Last season’s Irish Leger hero Wicklow Brave was a dramatic Grade One winner over hurdles at the Punchestown festival and will break from stall 12 of the 13 runners under top local pilot Javier Castellano.

The Kentucky Derby winning jockey Johnny Velazquez has been booked for Clondaw Warrior. It will be the Galway Hurdle winner’s second trip stateside having finished runner up in a Grade Three at Arlington in Chicago last August.

Friday’s turf race features five European-trained horses in all. They include the Sir Mark Prescott-trained St Michel and Hugo Palmer’s Wall Of Fire.

Mullins’s Grade One ambitions in Paris on Sunday are unlikely to be limited to Shaneshill as the top-flight Punchestown winner Bapaume is one of 13 remaining in the French version of the Triumph Hurdle, the Prix Alain du Breil.

Mullins won the €270,000 event last year with Footpad and also in 2013 with Diakali. Bapaume’s stable companions Meri Devie and Dandy Mag are still in the race too.