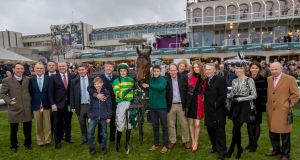 JP McManus landed a third Paddy Power Chase in four years - and a seventh in all - at Leopardstown on Thursday although the winner Auvergnat was the ‘wrong one’ for many punters.

The legendary owner’s colours were carried by eight runners in the most valuable race of the Christmas period and one of them, Any Second Now, was a major gamble to 5-1 favourite.

Some of that support at least could have been due to Mark Walsh’s presence on Any Second Now’s back.

The rider had enjoyed three winners earlier on the card including a surprise Grade One victory for the English trained stalwart Simply Ned. It brought his winner total for the week so far to five.

However Walsh’s hot-streak ground to a halt on Any Second Now who stayed on to be fifth but like everything else had no answer to the 28-1 outsider Auvergnat.

Instead it was Donie McInerney who did the steering on the biggest winner of his career less than two years after he rode his first ever winner on the same horse in a Cross-Country race at Punchestown.

In the interim the young Co. Limerick jockey was crowned champion conditional jockey last season and landing the coveted €200,000 handicap prize represents another step in his career.

“Things get tighter when you get down to 3lbs (claiming) but this will keep it going for another while and it’s great to get it,” McInerney said who dropped his whip on the run-in but still won by over six lengths.

It completed a tumultuous 24 hours for the jockey who on St Stephen’s Day looked likely to win a chase at Limerick only for his mount to crash out through a wing at the final fence.

Auvergnat’s trainer Enda Bolger also revealed that his latest riding protégé had been first into work on Christmas Day, mucking out and riding out.

“That’s why he’s getting the chances he’s getting. It’s not by accident. Mr McManus is always great to give young lads a chance,” Bolger said.

Renowned for his exploits in Cross-Country races, Bolger knew the scale of the Paddy Power challenge having saddled the subsequent Grade One winner Gilgamboa to finish only fourth in 2015.

“It’s a pleasant surprise but he travelled so sweet in the blinkers and we always thought one of these races was in him,” said Bolger.

Auvergnat was cut to 6-1 for the Cross-Country at Cheltenham in March and also earned 33-1 quotes for the Aintree National.

Earlier it was Mark Walsh who donned the McManus colours as the exciting flat recruit Sir Erec made a winning debut in the three year old maiden hurdle.

Sir Erec’s jumping was sketchy at times but he had enough in reserve to hold another newcomer, Tiger Tap Tap in a close finish. Both were put into the Triumph Hurdle betting with the winner on 10-1.

Walsh then stepped in for the sidelined Bryan Cooper as Paloma Blue’s occasionally tentative jumping style couldn’t prevent him landing a Beginners Chase, although he was helped when the favourite Real Steel fell at the last.

But the highlight of the jockey’s hat-trick was the British raider Simply Ned who is becoming a Christmas standard at Leopardstown.

After twice finishing third, runner up once, and getting last year’s renewal in the stewards room, Simply Ned’s fifth appearance in the Paddys Rewards Chase turned into perhaps his finest hour.

Off a relatively sedate gallop Nicky Richards’s veteran was last of a group of six turning into the straight and looking to be every inch on the verge of his 12th birthday.

It looked all over bar the shouting when Footpad put a lack-lustre first start of the season behind him, jumping superbly , and appearing to be well in charge even before Great Field’s exit at the final fence.

However the evens favourite was powerless when Walsh launched Simply Ned’s final challenge and proved half a length too good.

Just over an hour later the reigning two-mile title-holder Altior was imperious when winning at Kempton and the Champion Chase increasingly looks his to lose, an impression reflected in cramped 2-5 odds for Cheltenham.

However Willie Mullins insisted he will keep Footpad on the two-mile route and was happy to point to the impact on the horse of almost two weeks off after suffering an overreach on his previous start.

“I wonder did he just need the run. He missed a bit of time with that overreach and Ruby (Walsh) thought he might have actually blown up.

“Hopefully he did as I thought he had the race won going to the last. I thought he was fine coming here but there you are. You can’t get them straight back,” he said.

For Richards the result was yet more vindication of his daring approach and the trainer isn’t averse to having his stable star spend a sixth Christmas in a row in Dublin in 2019.

“We sort of train him for this end of the season. We try and catch the real big guns maybe a bit cold if that’s the right word.

“These lads will all go on to Cheltenham and be battling at Punchestown. We’ve had our Gold Cup and our day in the sun today,” he said.

As is his wont Mullins wasn’t long out of the sun and Aramon came from last to give the trainer a fourth win in a row in the Grade One Future Champions Novice Hurdle.

Ruby Walsh’s mount got the better of his hard-pulling stable companion Sancta Simona to the tune of ten lengths.

“It’s a pleasant surprise that he did it in that manner,” Mullins admitted. “When Sancta Simona took the lead I thought the race was over. I didn’t think he (Walsh) had that much in the tank. It was unbelievable what he pulled out.”

Jockey Finny Maguire landed the bumper for a second day running, this time on Dermot Weld’s classically bred Neptune who overhauled All For Joy in the closing stages.

1 Pete Sampras: The forgotten great with the best serve in the business
2 Super Rugby AU offers glimpse of rugby’s future if law changes are adopted
3 Cam Newton broke the mould: Can his flame be rekindled at the Patriots?
4 Tipping Point: DeChambeau’s transformation raises questions, but who will ask them?
5 Mental clarity in chaos: Novak Djokovic, the man who turned two into three
Real news has value SUBSCRIBE