Joseph O’Brien gets Grade One Christmas present with Le Richebourg 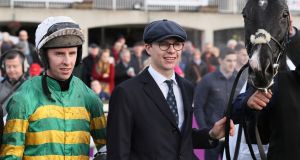 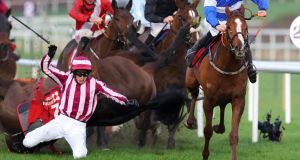 Christmas is the season of giving but it is 2018 as a whole that keeps giving to Joseph O’Brien and the young trainer saddled a memorable one-two in Leopardstown’s St Stephen’s Day feature led home by Le Richebourg.

The JP McManus-owned 3-1 shot landed the Grade One Racing Novice Chase by four and a half lengths from his 16-1 stable companion Us And Them with Voix Du Reve in third.

Mengli Khan was a disappointing 7-4 favourite in fourth and never shaped like landing a blow on the slick-jumping Le Richebourg, who went one better than his second to Delta Work in the Drinmore earlier this month.

A drop back to two miles looked ideal for the winner, allowing him join an illustrious roll-of-honour that includes two of the last three Arkle winners at Cheltenham, Douvan and Footpad.

Immediate bookmaker reaction was to cut Le Richebourg to a general 8-1 to do the same. However, whatever he does in the New Year he has already helped put a perfect seal on the old one for his trainer.

O’Brien opened his Grade One tally over jumps at Leopardstown back in February when Tower Bridge won at the inaugural Dublin Racing Festival.

It proved only an emotional appetiser though as Edwulf proceeded that weekend to record a fairytale Irish Gold Cup success, completing a perfect return from near-death at the previous year’s Cheltenham festival.

At the height of summer Latrobe provided the 25-year-old former champion jockey with a first classic victory on the flat in the Irish Derby, one of 107 flat winners in all in Ireland in 2018.

With a genuine classic prospect in the Newmarket Fillies’ Mile winner Iridessa to look forward to, 2019 promises to be no brake on O’Brien’s remorseless progress towards championship status as a trainer too.

That it is his father Aidan who represents the biggest block to O’Brien on the flat indicates the scale of a unique family achievement that also saw O’Brien’s younger brother Donnacha crowned champion jockey in 2018.

However, even the twin jumping behemoths, Willie Mullins and Gordon Elliott, might be forgiven for looking over their shoulder given that their young rival is also in the top-five on the National Hunt table.

A shock Christmas Hurdle defeat for Buveur D’Air at Kempton proved once again there are few certainties in racing.

But one sure thing surely is that prestigious victories like Le Richebourg’s mean legendary owner JP McManus will continue putting the considerable weight of his support behind O’Brien and then some.

McManus’s No 1 jockey Barry Geraghty was at Kempton so Mark Walsh successfully stepped up into the breach for Leopardstown’s big race.

“He got a lovely ride. The last day he ran a cracker but he was gaining lengths at his fences and we kept having to take him back because it was two and a half. The tempo of two-mile races suits him better,” O’Brien said.

Le Richebourg thrived on the unseasonably quick ground conditions that saw some of the hurdle races run almost 10 seconds faster than the same contests a year ago.

That included the Grade Two Knight Frank Juvenile Hurdle that gave the father and son team of Tom and David Mullins a win to remember with Rocky Blue, who broke his maiden over jumps in style.

A final flight exit from one of the 3-1 joint-favourites Coeur Sublime looked potentially decisive. However, despite his inexperience Rocky Blue didn’t put a foot wrong to win at 14-1.

“I bought him for €11,000 as a yearling and we always thought he was good but he took his time to come,” Mullins Snr explained.

“He learned a lot in Punchestown where he only jumped the last two and we felt if he jumped adequate he would improve a lot.

“Hopefully he holds his form and we can come back here for the Grade One race in February. That’s the obvious target and hopefully the wheels stay on the bus until then,” he added.

Klassical Dream earned 20-1 quotes for Cheltenham’s Supreme after making an impressive Irish debut in the opening race of the festival.

Willie Mullins’s French import took a chance at the last but jockey Paul Townend was impressed and said: “He’s a fair horse and it rode a good race. He landed flat-footed at the back of the last but picked up all the way to the line.”

Since City Island is owned by the well known businessman Seán Mulryan, news that Cheltenham’s Ballymore Properties Novice Hurdle is on his radar is no surprise.

The 15-8 favourite looked to need all of the two miles in the maiden hurdle on Wednesday but was well on top at the line under Le Richebourg’s rider Mark Walsh.

It was a second maiden ‘win’ for City Island who was first past post the at Galway in August. However, he was subsequently disqualified after testing positive for a prohibited substance.

The Mulryan colours were also successful in the bumper as Exit Poll lunged late to deprive Two Shoe Tom and give Jessica Harrington a 10-1 success. Winning jockey Finny Maguire got a two-day ban for his use of the whip.

Tisamystery landed the handicap chase for a second year running. Daniel Holden’s mount was well on top at the line and had half a dozen lengths in hand of Cubomania.