Altior cruises to victory in Desert Orchid Chase at Kempton 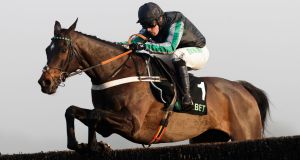 Altior cruised to victory in the Unibet Desert Orchid Chase at Kempton Park to extend his unbeaten record over jumps to a remarkable 16 races.

After defeats for high-profile stablemates Buveur D’Air and Might Bite 24 hours earlier, trainer Nicky Henderson was able to breathe a huge sigh of relief, as the 1-8 favourite cantered around for a routine success.

Former Champion Chase victor Special Tiara put the pace into the race – and it was a stern one – as usual front-runners Speredek and Diakali were taken off their feet somewhat.

Nico de Boinville moved Altior into a challenging position coming out of the back straight and briefly Diego Du Chamil looked to be travelling just as well.

As soon as Altior opened up, though, the race was over,and he sprinted away between the last two fences, with a flying leap at the last sealing the deal on the way to a 19-length triumph.

“After yesterday’s debacle and a few knocks here and there you get yourself in a fluster and start to worry about things,” said Henderson.

“This horse has been great the last fortnight. Nico has sat on him and Toby [Lawes, assistant trainer] has been happy with him.

“We were coming back quickly [since the Tingle Creek] and we are going to try to come back quite quickly for the Clarence House [at Ascot]. He is fit and I’ve just got to keep him fresh and well.

“After the Clarence House we will probably go straight to Cheltenham [Champion Chase] as we don’t need the Game Spirit this season.”

Colin Tizzard’s second season chaser staked a big claim for future major races as he took one of the most competitive handicaps in the calendar.

The six-year-old had advertised his ability when runner-up behind stable companion Sizing Tennessee in the Ladbrokes Trophy at Newbury four weeks ago – and showed he had improved again to land this prestigious prize.

Sent off the 3-1 favourite, Elegant Escape barely gave his supporters an anxious moment, with Tom O’Brien enjoying an armchair ride from the start.

O’Brien had him perfectly-placed in fourth place as Vieux Lion Rouge and Yala Enki set a searching gallop. When Vieux Lion Rouge had enough, his David Pipe-trained stablemate Ramses De Teillee joined in.

O’Brien asked his mount to take closer order in the straight, however, and Elegant Escape did not shirk the issue.

Challenging for supremacy from the fourth-last fence, Elegant Escape went on to win by a length and a quarter from Ramses De Teillee, with Yala Enki four lengths back in third place. Rons Dream was a further 11 lengths away in fourth.

Elegant Escape was cut to 20-1 from 33-1 for the Randox Health Grand National with Betfair.