Despite expensive revamp, 12,000 attendance less than half four years ago 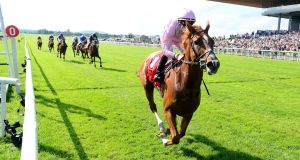 Horse Racing Ireland’s chief executive has played down the significance of an official attendance of just less than 12,000 at Saturday’s Dubai Duty Free Irish Derby but conceded parts of the new €81 million Curragh facility were stretched to cope with it.

That might ordinarily have dominated the fallout from Ireland’s premier classic, especially as Sovereign led home a sixth 1-2-3 in the race for Aidan O’Brien who secured a 13th Irish Derby win in all.

However, the context was a first Irish Derby run at the Curragh after an extensive two-year revamp with €36 million of State money put into the biggest capital development project in the history of Irish racing.

So considering almost 12,000 was less than half the reported attendance at the Derby just four years ago – and the boss of the Derby sponsor had predicted a crowd of more than 20,000 for the new facility – it looked a disappointing outcome.

Worse perhaps was the sight of lengthy queues for toilets, as well as food and drink, at the ground level of the new Aga Khan Stand, something which prompted criticism of the Curragh on social media.

It was that element rather than crowd figures which concerned Horse Racing Ireland’s chief executive Brian Kavanagh, who is also on the board of Curragh Ltd.

“I said the other day that the number was not the issue,” he said yesterday.

“If a turnstile clicks one more time does that deem it a success or a failure? Of more concern to me are the queues that were there. It’s more important that people who attend have a positive experience.

“You look at the positives and the negatives in any new facility. Overall the atmosphere was very good. What didn’t work was the food and beverage side of things. That’s disappointing. That needs looking at and there’s no point saying anything else.

“The challenge now is to develop the facility to a situation where it receives popular support. I thought the attendance on the first two days – Thursday (2,859) and Friday (3,661) – was disappointing.

“I think the ability of the facility to cope with people who were there yesterday at ground level was stretched and will need attention.

“But that has happened at other racecourses before. You hear it at Ascot and Longchamp. It takes time with a new facility, both with those operating it and the customer, to get used to the layout. It will be addressed and can be addressed. The Curragh is a work in progress,” Kavanagh added.

The Curragh’s chief executive Derek McGrath said that putting more bars in place for the track’s busiest day of the year will be among the tweaks made on the back of what happened on Saturday.

However, he expressed delight at how the day went overall and said: “It was a very important moment in that the venue worked. We’re nowhere near where we want to be but it was a good start.

“We’ve had the venue for ten weeks and my team has been working 24 hours a day to get it ready. We’ve had issues, such as the fire alarms going off on Friday, and from an organisational point of view it’s how you react to these things. Every time you open up you learn something.

“When you look at the learnings of yesterday, that [queuing] is a stand out. But I think it represents interest in what’s on offer. It’s a positive that comes with its own challenges.”

“Sovereign’s success was a 13th Irish Derby in 23 years for European racing’s dominant trainer, Aidan O’Brien. It is an unmatched dominance of any major world classic.

Almost inevitably after Sovereign made all under Beggy to win by six lengths from the Epsom Derby winner Anthony Van Dyck, with Norway in third, competition fears were once again expressed.

Brian Kavanagh admitted it is a challenge for the €1.5 million race but said O’Brien couldn’t be faulted for being successful, or Coolmore for having the dominant sire, Galileo.

Instead he pointed to the 2005 decision by France’s authorities to cut the French Derby distance to an extended mile and a quarter as a significant factor.

“If you said to me at the start of the year you’d have the first, third and fourth in the Epsom Derby running here, including a credible contender from Kevin Prendergast [Madhmoon] which would have been a wonderful story, you’d say that’s okay.

“It’s a broader question than the race itself because who was missing yesterday? The one issue with the Derby in recent years is the absence of a French challenge which was one of the defining features of the race.

“If you look at the winner of a French Derby at a mile and a half coming yesterday it would have completely changed the narrative of the race.

“We continue to endeavour to persuade France to do that [increase the Prix du Jockey Club back to a mile and a half] but they’re not so  minded and that is a problem,” said Kavanagh.

1 Keith Duggan: Through the glories and the disgraces, we were all Maradona addicts
2 Diego Maradona dies of heart attack, aged 60
3 Rugby Stats: Blame game at lineout time is on the whole team
4 All bets are on as America opens the gambling sluice gates and the dollars flow
5 Andy Farrell to delve deeper into Irish squad for team to play Georgia
Real news has value SUBSCRIBE