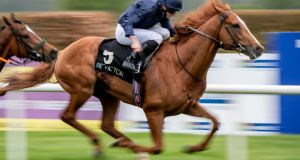 Blenheim Palace will join Cape Of Good Hope in a bid for the $1 million Belmont Derby in New York. Photograph: Morgan Treacy/Inpho

Aidan O’Brien is on the verge of a 25th Grade One success in the USA and will have a couple of opportunities to reach the landmark at Belmont’s Stars & Stripes Festival this Saturday.

Both Cape Of Good Hope and Blenheim Palace are on course for the $1 million Belmont Derby, a race O’Brien won at the New York track in 2016 with Deauville.

Last year the Irishman landed the $750,000 Belmont Oaks with Athena and Just Wonderful is in line to try and follow that up this weekend.

The US raid is part of a busy top-flight Saturday for O’Brien’s Ballydoyle team with Magical likely to take on her old rival Enable in Sandown’s Coral Eclipse Stakes earlier in the day.

O’Brien has five of the 13 entries remaining in the Eclipse and said on Tuesday: “It looks maybe like Magical and something else will run at the moment.”

Enable has been backed into evens favouritism with the Eclipse sponsor as the dual-Arc heroine readies for her first start since beating Magical  in last November’s Breeders Cup Turf.

With Ryan Moore on duty in England, the champion trainer added that Wayne Lordan and Seamus Heffernan are the likely riders to team up with his Belmont raiders.

The US has been a productive source of top-flight winners for O’Brien over almost two decades. Ciro was a first Grade One winner for him in Arlington’s Secretariat Stakes in 2000 and a year later Johannesburg scored a famous Breeders Cup Juvenile success at Belmont. Athena was the last of his 24 US Grade One winners to date a year ago.

Blenheim Palace, a brother to Churchill, ran on Irish Derby day at the Curragh last weekend, when runner-up to Buckhurst in the Group Three International Stakes.

A quick turnaround proved no trouble to Athena last year who won in New York just six days after finishing third in the Pretty Polly Stakes at the Curragh.

Just Wonderful was Ryan Moore’s pick in May’s 1,000 Guineas at Newmarket when sixth to her stable companion Hermosa. She was subsequently seventh to the same filly in the Irish Guineas and beat just one home in Royal Ascot’s Coronation Stakes.

Just Wonderful is a 10-1 shot in some ante-post betting for Saturday’s race where’s she’s likely to renew rivalry with the top US grass filly, Newspaperofrecord. The latter was a spectacular winner at the Breeders Cup last year in a race in which Just Wonderful was fourth.

That’s three shy of the tally he’d secured at this stage of the season in 2017 when ultimately setting a new Group/Grade One world record of 28 top-flight winners, breaking Bobby Frankel’s old record of 25.

Sovereign’s stunning success at the weekend has seen the colt raised 13lbs by the handicapper to an a new official mark of 118. That is the same as the Epsom Derby winner Anthony Van Dyck who Sovereign beat by six lengths on Saturday.

Colin Keane is a 1-2 favourite to regain the jockeys’ title from the current champion Donnacha O’Brien after hitting the midway point ten winners clear of his rival (47-37.)

Keane has seven rides at his local Co Meath track, four more than O’Brien, although the latter does team up with his father for South Sea Pearl in the concluding fillies maiden.

Keane is on the 75 rated Lady Olenna who looks to set a reasonable standard in this although she may do well to confirm Limerick form with Monty’s Miracle and her in-form rider Niall McCullagh.

Secret Stash didn’t enjoy much luck in running on her Fairyhouse debut but with her trainer Jessica Harrington still in outstanding form she can get the festival off to winning start in the juvenile maiden.