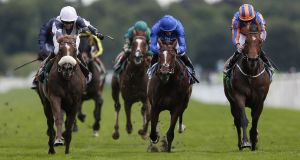 Ulysses lived up to his classic pedigree with a resounding defeat of Aidan O’Brien’s classic star Churchill in York’s Juddmonte International on Wednesday.

The son of Galileo and the Oaks heroine Light Shift played his cards last and decisively under Jim Crowley to beat O’Brien’s 5-2 favourite by two lengths.

Churchill in turn had a neck in hand of his old rival Barney Roy and the other O’Brien runner, Cliffs Of Moher, was fourth.

It was a record sixth success in one of Europe’s most prestigious Group One prizes for Ulysses’ trainer Michael Stoute and confirmed the late-maturing four-year-old as one of racing’s top stars.

However, the result made it hard to shift the sense that it is his King George conqueror Enable who right now ranks as European racing’s superstar three-year-old.

She lines up in Thursday’s Yorkshire Oaks with a fourth top-flight success in a row seeming a formality for a filly capable of beating Ulysses by almost five lengths at Ascot a month ago.

Considering John Gosden’s previous King George and Oaks winning heroine Taghrooda got beaten at 1-5 in the same race just three years ago, only the brave or the silly are likely to lump on at similarly cramped odds.

But even odds-on prices about Enable ultimately winning the Arc in October are difficult to logically counter on anything bar a value basis considering Wednesday’s action shaped as almost an advertisement for her ability.

With Stoute nominating November’s Breeders’ Cup at Del Mar as the ultimate target for Ulysses, it is Enable’s stable companion Cracksman who is rated by many bookmakers as her biggest Arc threat.

Gosden’s Irish Derby runner-up routed Ballydoyle’s runner Venice Beach to the tune of six lengths in the Great Voltigeur after which Britain’s top trainer appeared reluctant to even commit Cracksman to another run this year.

In contrast Churchill is likely to be kept a lot busier after an admirable effort on his return to action when tackling a mile and a quarter for the first time. Leopardstown’s Champion Stakes could be next for him.

There was certainly nothing wrong with Churchill’s stamina as he emerged best from a prolonged duel with Barney Roy up the long York straight.

However, despite morning rain turning the ground good to soft, the argument he deserves similar superstar status to Enable looks ropey after a second defeat in a row.

“He didn’t wilt anyway: it was a great run for his first try at the trip,” O’Brien said afterwards.

“We knew conditions weren’t ideal but at least he has left Ascot behind him. Goodwood messed us up as we were ready to run there but you can’t do anything about the weather. The Irish Champion is very possible but he would have to be very well,” he added.

Stoute had the comfort of one of those “never a blip” races as Ulysses sat off a good pace set by Barney Roy and Cliffs Of Moher with Crowley able to leave his challenge as late as possible.

“It all just went so smoothly and there was never a blip. I think it was his best performance to date. I never had any worries the way he was travelling,” the veteran Newmarket trainer said.

It was a sixth win in the race for Stoute, 29 years after his first with Shardari who ultimately went on to run in Dancing Brave’s Arc. The priority for Ulysses though is in California rather than France.

“I think it’s time to give him a break and work backwards from the Breeders’ Cup Turf. The owners are keen to go for that,” he said.

Cracksman though is as low as 7-1 for the Arc after his Voltigeur rout.

Thursday’s focus though will be all on Enable.