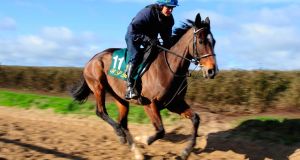 Ruby Walsh has sided with Limini over Vroum Vroum Mag in the OLBG Mares’ Hurdle on the opening day of the Cheltenham Festival.

Willie Mullins has won eight of the nine runnings of the two-and-a-half-mile contest, with the remarkable Quevega landing six consecutive renewals before Glens Melody and Vroum Vroum Mag struck gold in the last two years.

Mullins has kept his cards close to his chest regarding running plans for this year’s renewal and his decision to let his two star mares do battle must go down as a surprise.

Connections considered supplementing Limini for the Champion Hurdle following an impressive comeback victory over Apple’s Jade at Punchestown last month before eventually deciding to let her take on her own sex at Prestbury Park.

That decision led many to believe Vroum Vroum Mag could contest the Champion Hurdle herself, while she also holds entries in the Champion Chase, the Ryanair Chase and the Stayers’ Hurdle.

However, she is set to take on her stable companion and defend her Mares’ Hurdle crown in the hands of Paul Townend.

Apple’s Jade appears the biggest threat to the Mullins-trained pair. A former Mullins inmate herself before joining Gordon Elliott, the five-year-old touched off Vroum Vroum Mag in the Hatton’s Grace Hurdle at Fairyhouse in December before finding Limini too strong.

Alan King’s Yanworth heads the betting having landed the Coral Hurdle at Ascot, the Christmas Hurdle at Kempton and the Kingwell Hurdle at Wincanton so far this season.

The seven-year-old is one of three runners for leading owner JP McManus along with the Nicky Henderson-trained pair of Buveur D’Air and My Tent Or Yours.

Henderson also saddles Brain Power in a bid to win the race for a record sixth time.

Mullins, who has saddled four of the last six winners of the two-mile showpiece, relies on Footpad and Wicklow Brave, with Vroum Vroum Mag instead declared for the Mares’ Hurdle.