Controversial Naas race can fall to Michael O’Leary and Gangster 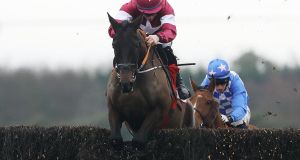 Bryan Cooper has opted to ride Ball d’Arc in Sunday’s Grade Three novice chase at Naas. But the latter has plenty to find on Gangster on official figures. Photograph: Lorraine O’Sullivan/Inpho

The weekend priority for Ireland’s top jockeys will probably be to come through in one piece so plenty of fingers will be crossed that Sunday’s Grade Three novice chase has already garnered its share of headlines.

At Tuesday’s five-day declaration stage, the Naas Directors Novice Chase saw a remarkable nine of the ten entries belonging to Michael O’Leary’s Gigginstown Stud. JP McManus’s Oscar Knight remains the odd one out of the final declared field of five.

If the power of a select group of powerful owners will be stamped all over Irish fortunes at Cheltenham next week, the entry situation for Naas has renewed the focus on the impact of their day-to-day dominance at home.

Horse Racing Ireland has confirmed that the race was reopened on Tuesday under the rule introduced in November which gives an extra 45 minutes to declare into races which have less than 10 entries.

HRI’s Director of Racing, Jason Morris, said that 62 races to date have reopened under the new rule, with 59 horses entered on top of the original entries, resulting in 28 extra runners.

“Ireland has a relatively limited programme so that meets our expectations. We’re trying to boost races that are struggling for runners so anything extra can only be positive. And it’s available to everyone, large or small, if they haven’t thought to enter and feel they could pick up prizemoney,” Morris said.

Gangster will be ridden by David Mullins who has two rides on Sunday, as does Cooper, who will also be twice in action on Saturday at Gowran.

Mark Walsh is another jockey with plenty to look forward to next week and he has half a dozen weekend rides, including Vent De La Cote in Sunday’s €100,000 feature.

One absentee however is Ruby Walsh, odds on to be once again top jockey at next week’s festival, and who has opted not to team up with half a dozen Willie Mullins-trained weekend runners, including two in Beginners Chases.

Paul Townend steps into the breach on Dicosimo at Gowran and will be on board the Mullins hope Sambremont in a Leinster ‘National’ which takes places at Naas just a fortnight before the track hosts the start of the 2017 flat season on turf.

Gordon Elliott fields three in the big handicap field of 19, including the leading Aintree hope, Ucello Conti, who will be ridden by top cross-channel based jockey, Daryl Jacob. Perhaps the combination of three miles and very testing ground could be ideal for the mare, Bonny Kate.

Patrick Mullins is embroiled in a real battle with Jamie Codd to retain his amateur riders crown but looks to have good weekend opportunities, including Townshend and Mystic Theatre at Naas.