Leopardstown to push online sales to students and pensioners 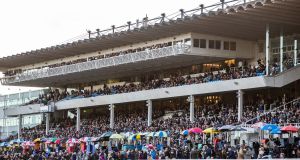 The packed grandstands at Leopardstown this Christmas. Photograph: Bryan Keane/Inpho

Students and pensioners will be able to buy online tickets in advance of the Dublin Racing Festival at Leopardstown in just over two weeks’ time.

The step has been taken by Leopardstown’s officials after lengthy queues developed outside the track on St Stephen’s Day. That resulted in gates having to be opened at one point with an estimated 400 customers gaining free entry.

Track authorities admitted to being surprised by the numbers of people looking to buy tickets at the gates, including much larger numbers of younger people than anticipated. They also described the queues as unacceptable.

However online tickets for the two-day €1.8 million Dublin Racing Festival at the start of February are set to be made available this weekend for both students and pensioners to buy.

“But we’ve made the decision to introduce pre-sales for students and OAPs and we will introduce it with a flash sale this weekend.

“It will be the first time ever selling them online in advance so we’re hoping the students will migrate towards it. They will be cheaper to buy in advance that on the day so we think that will help,” Leopardstown’s chief executive Pat Keogh said on Wednesday.

“There was an ID issue so that was the reluctance to sell tickets in advance. But we’ve got to accept we want more people buying in advance and we have to accept that will mean checking those tickets on the day,” he added.

Keogh was speaking at an official festival launch in Leopardstown which will stage the second renewal of National Hunt racing’s equivalent of ‘Irish Champions Weekend’ on the flat.

Last year saw an official attendance of 26,136 over the two days at Leopardstown. However this year the first day meeting takes place on the same Saturday that Ireland play England in a rugby international at the Aviva Stadium in Dublin.

In 2018 the first day of the festival was the better attended of the two meetings (14,105) and Keogh hopes the combined figures will “move on a bit from there”.

The Leopardstown boss doesn’t expect the counter-attraction of the rugby international in Dublin to have an impact.

“You have a lot of English people coming over that don’t have a ticket for the game and if you look at social media a lot of them are saying they might watch the match here. We will have it screened everywhere here,” he said.

“There are buses from here to the Luas so you can watch the Irish Champion Hurdle, miss the last two races, and be comfortably in the Aviva in time, if that’s what you want to do,” Keogh added.

On Wednesday top trainer Gordon Elliott confirmed his star mare Apple’s Jade is on course to try and secure a tenth career Grade One success in the Irish Champion Hurdle.

It is set to be her first try at the minimum two mile trip since November of 2016 when she was beaten by Rashaan at Down Royal on what was her first run for Elliott after transferring from Willie Mullins.

“We’ve nothing to lose by having a go at it,” said Elliott although he described the chances of Apple’s Jade ultimately running in the Champion Hurdle at Cheltenham in March as “very doubtful”.

Mullins has half of the dozen entries left in the Irish Champion Hurdle, a race he has won six times including a famous five in a row for Hurricane Fly between 2011 and 2015.