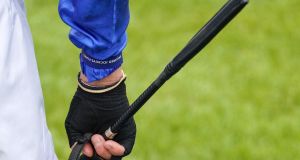 IHRB spokesman Niall Cronin said: “Such a number of breaches in one race is thankfully an isolated incident although not what you want to see.” Photograph: Alan Crowhurst/Getty Images

Racing’s regulator has described as “an isolated incident” the single race at Dundalk on Monday that saw five jockeys suspended for excessive use of the whip.

The riders of the first five horses home in the two mile handicap won by Nightly Wailing were all handed bans for their whip use.

They included Shane Foley, runner-up to Colin Keane in the jockey’s championship, who got six days after riding Aasleagh Fawn into fourth place as well as Rory Cleary on the winner who got two days.

Robbie Colgan on the runner-up Punters Poet was suspended for two days while Mark Enright on Important Message (third) got six days and Gearóid Brouoder on My Manekineko in fifth received a seven-day suspension.

It was a rare concentration of offences in one race and came on the heels of two other whip bans handed out earlier on Monday afternoon’s Dundalk card.

The Irish Jockeys Association (IJA) labelled the glut of offences on Monday as a “blip” and contrary to the trend since the spike in whip penalties that occurred last year.

That followed the introduction of new regulations by the Irish Horseracing Regulatory Board (IHRB) which put an eight-stroke limit on horses being struck. In the five months after the rules were introduced there were over 120 breaches by riders.

The IHRB spokesman Niall Cronin said on Tuesday: “Such a number of breaches in one race is thankfully an isolated incident although not what you want to see.

“Anytime there is change people are concerned they’re going to have to adapt from what they’re used to. Thankfully it [use of the whip] hasn’t been the cause for concern that some people feared it might be this year.”

The IJA’s spokesman, Andrew Coonan, said: “Five riders in one race is most unusual and effectively there were seven riders suspended last night for whip offences.

“It seems to have been a very unusual night and I would regard it as a blip.

“There is a downward trend in whip offences. I think it has gone from .86 of one per cent to .69 of enquiries being whip involved. So the figures are going in the right direction.

“Talking to the riders the only thing we can think of is that that particular race was two miles, a relatively modest handicap, where a lot of horses probably went fast early and then slowed in the last three furlongs.

“There were a lot off the bridle a long way out. That’s the only thing we can point to.”

He added: “It isn’t an excuse but I think three or possibly four of the five have one stroke more than the permitted eight. They pick up the stick and flick it to get going but the flick itself is interpreted as a strike.

“I do know some stewards take a slightly different view on it. But strictly speaking your hand is off the reins and therefore it can be regarded as a strike.”

The winter all-weather campaign continues at Dundalk on Wednesday where champion jockey Keane returns to local action after his successful Breeders’ Cup raid with half a dozen rides.

They include the fancied two-year-old Offiah for Ger Lyons as well as Jack Berry House who Keane rides for the first time in a mile handicap.

In other news Willie Mullins’s Saint Roi has been made favourite to give his trainer a remarkable 10th victory in a row in Sunday’s Unibet Morgiana Hurdle at Punchestown.

Just six entries remain in the first Grade One hurdle of the jumps season with Saint Roi joined by his stable companion, and last year’s winner, Saldier.

The latter followed in the footsteps of some illustrious Mullins stars that have dominated the Morgiana over the last decade.

They include Hurricane Fly who landed a hat-trick between 2012-14 and Faugheen who scored in 2017.

Saint Roi was an impressive winner of last season’s County Hurdle at Cheltenham and was cut to as low as 7-1 for the Champion Hurdle in March after scoring on his comeback at Tipperary last month.