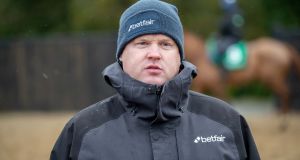 Gordon Elliott: will be hoping Apple’s Jade can return to her best at Fairyhouse and register a record-breaking fourth successive win in the Hatton’s Grace Hurdle. Photograph: Morgan Treacy/Inpho

Apple’s Jade will face a maximum of eight rivals when she bids for a historic fourth victory in the Baroneracing. com Hatton’s Grace Hurdle at Fairyhouse.

However, she will return with something to prove as she goes in search of the four-timer on Sunday, having disappointed at Cheltenham, Aintree and Punchestown in the spring, and had to make do with the runner-up spot on her reappearance in the Lismullen Hurdle at Navan.

Elliott has also confirmed Coko Beach and Surin as contenders, while Willie Mullins has whittled his potential team down to four.

The first of three Grade One events on a top-class card is the Royal Bond Novice Hurdle, in which Elliott appears to hold the aces.

The star attraction is last season’s Champion Bumper hero Envoi Allen, who made a foot-perfect start to his career over hurdles at Down Royal at the start of the month.

He could be opposed by high-class stablemate Abacadabras, with Joseph O’Brien’s trio of Embittered, Midnight Run and Front View, and the Mullins-trained Foveros also featuring among 10 contenders.

Elliott’s Samcro is one of nine going forward for the Drinmore Novice Chase.

The seven-year-old looked much more like his old self when making a winning return to action on his fencing bow at Down Royal, but might not have things all his own way this weekend.

Elliott has also left in Battleoverdoyen, Champagne Classic and Tintangle, while the standard is arguably set by Burrows Saint, who provided Mullins with his first Irish Grand National success in the straight.

Ronald Pump has been supplemented by trainer Matthew Smith to add further strength in depth, with Fakir D’Oudairies also in the mix.