New Irish horse racing regulatory board to start in 2018 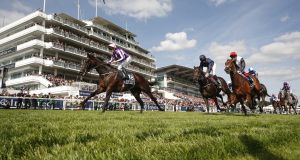 Pádraig Beggy riding Wings Of Eagles to win The Investec Derby from Cliffs Of Moher on Derby Day at Epsom. Photograph: Alan Crowhurst/Getty

The complexion of Irish racing’s regulation is set to change on New Year’s Day when almost 230 years of Turf Club administration will change and come under a new banner of the Irish Horse Racing Regulatory Board.

The Turf Club, which incorporates the Irish National Hunt Steeplechase Committee, is the private body which has administered Irish racing’s integrity since 1790.

However it is planned from January 1st that both it and the INHSC will become be part of a new limited company – the Irish Horse Racing Regulatory Board – which will protect members from personal liability.

“The clubs will continue and there will be boards of directors rather than stewards,” Denis Egan explained. “But the way I put it is that on December 31 you’ll wear a blue jersey and on January 1st a green jersey. That’s all it is.”

The Turf Club has been involved in a number of expensive legal challenges and actions in recent years and the move to a limited company will help indemnify its members.

“Under legislation the Turf Club and the National Hunt Committee have the power to set up a limited liability company to carry out its functions,” Egan said.

“Running a regulatory structure through a private club is probably not very good governance so this will set up a more structured approach,” he added.

Egan said some plans for the new entity have yet to be finalised and added that arrangements are in place to transfer employees from one organisation to another with no change to their working conditions.

Meanwhile, Aidan O’Brien is almost certain to secure a world-record tally of Group One winners before 2017 is out and the champion trainer’s priority on Saturday will be his four-pronged assault on Doncaster’s Racing Post Trophy.

However he will also be represented on Saturday by nine runners at Leopardstown’s final flat fixture of the year where Flag Of Honour could provide O’Brien with an 11th success in the nine furlong Eyrefield Stakes.

O’Brien’s three runners for the newly promoted Group Three are divided between Emmet McNamara, Mick Hussey and Pádraig Beggy who is assured of being remembered as one of the racing stories of the year after his shock 40-1 Epsom Derby success on Wings Of Eagles in June.

Beggy is on Flag Of Honour who was never a factor in Newmarket’s Autumn Stakes a fortnight ago, starting slowly and appearing to be in trouble throughout before ultimately finishing fifth to Ghaiyyath.

Before that he’d shown signs of greenness too when winning his maiden at Naas. Flag Of Honour has to step up but he could benefit significantly for that Newmarket experience and get the better of the Aga Khan’s Galway winner Hazapour.

McNamara looks to be on Ballydoyle’s No. 1 hopes in the juvenile maidens where Alice Springs’ sister Hence can make it third time lucky and Full Moon should relish better going than his Naas debut.

Leopardstown’s other black type event, the Knockaire Stakes, would look an outstanding opportunity for the English raider So Beloved to win his first race in 17 months were it not for a stall 14 of 16 draw.

Such a draw is potentially a major drawback at seven furlongs here. However So Beloved’s 112 rating, and his narrow Prix de la Foret defeat to Acclaim, suggest he may have the quality to overcome it.

Colin Keane rides Celebration for Ger Lyons in the Listed heat, one of seven mounts the season’s leading jockey can look forward to as his championship rival Pat Smullen sits out a one-day suspension.

The Bank Holiday action continues with two National Hunt fixtures at Galway and Wexford on Sunday.

Willie Mullins aims to saddle three hopefuls for the Melbourne Cup on Tuesday week but will be just doubly represented this weekend with a couple of runners at Wexford.

Ruby Walsh gets the leg up on the Clonmel bumper winner Itsonlyrocknroll who looks a sharp enough sort to go close on his jumping debut around this track.

In other news, Ger Lyons has engaged Jamie Spencer to ride the Birdcatcher winner Moonlight Bay for the Listed Radley Stakes at Newbury on Saturday.

Moonlight Bay won the historic Naas Nursery on her first start for Lyons earlier this month and she will be joined in the seven furlong event by another Irish challenger, Sunday Smart.

Patrick Prendergast’s filly won her maiden at Limerick on her previous start and will be ridden by the classic winning Irish jockey Ted Durcan.