Thistlecrack is out of the Cheltenham Gold Cup 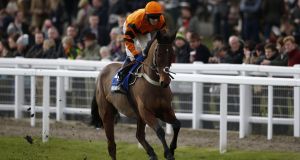 Tom Scudamore onboard Thistlecrack. the favourite for the Cheltenham Gold Cup has been ruled out of the race with an injury. Photo: Alan Crowhurst/Getty Images

Thistlecrack has been ruled out of the Cheltenham Gold Cup and the rest of the jumps season, having been found to have injured a tendon. The news broke at lunchtime on Tuesday after appearing to leak out in the betting markets on the Cheltenham race, for which he had been favourite for months.

“Thistlecrack is out,” said the horse’s trainer, Colin Tizzard, in quotes first reported by the Racing Post. “He had heat in his leg last night. The vet scanned him this morning and it’s a slight tendon tear.”

The news is the first serious bump in the road in an amazing season for Tizzard, whose big-race wins included the King George VI Chase on Boxing Day with Thistlecrack. Even after the bad news, the Dorset trainer still has the top two in the Gold Cup betting with Native River at 11-4 and Cue Card at 7-2 in revised prices hastily issued by Ladbrokes.

But Thistlecrack had been just 15-8 for the race and his absence will be a blow not just to Tizzard but to fans of jump racing in general, as the nine-year-old had become perhaps the most exciting jumps horse in training.

While his run of nine consecutive wins was brought to an end by Many Clouds at Cheltenham last month, Thistlecrack’s reputation was arguably enhanced by that effort against a rival of extraordinary toughness, who died moments after crossing the line.

The trainer and jockey combination of Tizzard and Tom Scudamore would also have helped to make Thistlecrack a popular winner at next month’s Festival. Scudamore may now be left without a ride in the Gold Cup.