Ryan Moore teams up for first time with Winter in Sunday’s 1,000 Guineas 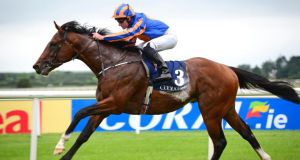 Churchill is bidding to become the fourth Ballydoyle colt in all to complete the Newmarket-Curragh Guineas double. Photograph: PA Wire. 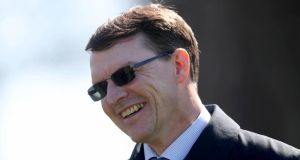 Aidan O’Brien: it will be a shock if his colt Churchill does not win the Tattersalls Irish 2,000 Guineas on Saturday. Photograph: Donall Farmer/Inpho

Minding’s absence from Ireland’s first Group One action of 2017 is a reminder of racing’s innate unpredictability but Churchill could start the hottest Tattersalls Irish 2,000 Guineas favourite in 75 years so it really will be a shock if Aidan O’Brien’s colt does not win on Saturday.

Not that SPs are any guarantee. One of the few blips on Minding’s career prior to the setback which has sidelined her until autumn was last year’s 1,000 Guineas loss at odds of 4-11. Four months later and her stable companion Order of St George lost the Leger at 1-7.

However, Churchill lines up in the first Curragh classic of the year against only five opponents, two of which are stable companions, and with a near-faultless record which means he may wind up the shortest-priced Irish Guineas winner since Windsor Slipper in 1942.

Maybe fate or circumstance will play a hand but as of now it’s a hard sell to bill this as a competitive classic.

Churchill has been trading all week at 1-3, an all-but-impossible betting proposition for all bar the biggest hitters, which is likely to make the first leg of the Curragh’s Guineas weekend little more than a watching exercise for most.

It’s 20 years since O’Brien pulled off the Guineas double to secure the first of his 68 European classics to date, an unprecedented rate of success which contains among his 10 Irish 2,000 Guineas winners superstar names such as Rock of Gibraltar and Gleneagles.

Churchill bids to become the fourth Ballydoyle colt in all to complete the Newmarket-Curragh Guineas double – and a ninth in total – and beforehand at least looks to have a relatively straightforward task.

Given he has already won yielding to soft ground, the early-morning rain due to hit the Curragh should not be an issue.

The weekend’s sole cross-channel classic challenger Thunder Snow disgraced himself in the Kentucky Derby when pulled up with a bronco display soon after the start so has plenty to prove under Christophe Soumillon.

The unknown factor is the unbeaten but inexperienced Irishcorrespondent. He needs to take a giant leap forward in form terms although history shows that’s not impossible in this race.

However, on the type of Group One day which the Curragh has primarily remained open for during its €70 million redevelopment there’s likely to be more speculation about temporary facilities and the size of crowd they’ll have to cater for than who’s going to win the big race.

One firm is going 7-4 about Churchill and his stable companion Winter bringing off the Curragh Guineas double, just like they did at Newmarket earlier this month. Winter is one of four Ballydoyle fillies among an eight-strong field for Sunday’s 1,000, where she will be ridden by Ryan Moore for the first time.

If the suspicion remains that Winter was helped at Newmarket by her new rider’s uninspired effort on Rhododendron she is still a worthy favourite for a race in which she is one of just two proven Group One winners.

The other is Intricately, who brought off a memorable Moyglare success last September for O’Brien’s sons, Joseph and Donnacha.

Intricately was 25 lengths behind Winter at Newmarket but prior to that was just a length and a half off her, and conceding 3lb, in the Leopardstown trial won by Hydrangea.

It’s a big ask to forgive Intricately that Newmarket effort. But at a big price against an odds-on favourite she could represent some value given the apparent better winning form Joseph O’Brien’s horses have been in recently.

Pat Smullen has yet to win in three rides on Rehana but replaces Shane Foley on the Aga Khan’s filly in the 1,000.

Michael Halford is seeking a first classic and between Rehana and Irishcorrespondent the Co Kildare trainer comprises much of the meaningful classic threat to O’Brien this weekend.

Minding’s absence opens up the Tattersalls Gold Cup, although Ballydoyle still have three realistic shots at the Group One even if it’s a mild surprise Moore is on Deauville rather than the filly Somehow.

Johannes Vermeer isn’t out of it either considering he was only half a dozen lengths behind Minding in the Mooresbridge. It was Moonlight Magic, though, who got closest to 2016’s Horse of the Year at Naas and he looked then as if the outing would bring him on.

The overall strength of the Ballydoyle operation gets an early illustration in the weekend’s very first race. A trio of Galileo newcomers include full sisters to no less than Churchill and Winter.