Mullins may run Douvan in warm-up at Gowran Park 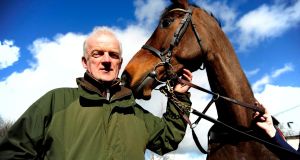 Willie Mullins has kept open the option of giving his superstar performer Douvan a pre-Cheltenham warm-up at Gowran Park on Saturday.

A Grade Two Red Mills Chase that already promised a mouthwatering clash between Our Duke and the top novice Presenting Percy had another ingredient added to the mix at Tuesday’s forfeit stage with Douvan’s inclusion among 10 entries.

The horse described by Mullins as the best he’s ever had through his hands has been out of action since a shock defeat in last season’s Queen Mother Champion Chase at Cheltenham.

Initially ruled out for the rest of this season when exhibiting intermittent signs of lameness in December, Douvan is as low as 7-2 for Champion Chase redemption in four weeks’ time after a faster than anticipated recovery.

On Monday Mullins confirmed he is preparing Douvan for the Champion Chase – and a potential clash with Altior. He has now indicated he is prepared to wait until later this week before deciding if the brilliant eight-year-old will have a run prior to the festival.

Douvan lost his unbeaten record over fences at Cheltenham last March when finishing seventh to Special Tiara as a 2-9 favourite. He was found to be lame immediately after the race and was later diagnosed with a pelvic injury.

Douvan isn’t the only Mullins star who could hit the comeback trail this weekend.

The Grade One winner Bellshill, who hasn’t run since finishing third in last March’s RSA, joins Douvan and the 2017 winner Ballycasey among the 10 Red Mills possibles. Bellshill routed Balko Des Flos on his chase debut at Gowran last season.

Another former top-flight winner, Abbyssial, has been out of action for almost three years but has the option of either a Beginners Chase or the Grade Three Trial Hurdle on Saturday. Abbyssial ran in the same race in 2015 and looked to have a leading chance when falling at the second-last.

The Mullins comeback theme could also extend to Sunday’s Navan action where the star mare Vroum Vroum Mag – a 7-1 shot for Cheltenham’s OLBG Mares event – is one of five entries for the champion trainer in the Grade Two Ladbrokes Boyne Hurdle.

Vroum Vroum Mag started favourite for last April’s Champion Hurdle at the Punchestown festival but was found to be lame after finishing out of the money behind her stable companion Wicklow Brave.

The 2017 Ten UP Novice Chase saw a spectacular performance by Acapella Bourgeois and this Sunday’s renewal has nine potential starters.

They are four entries from Gordon Elliott including the impressive Thyestes winner Monbeg Notorious, one of four potential starters for Michael O’Leary’s Gigginstown Stud team.

Mullins has a trio to pick from including last month’s impressive course winner Bonbon Au Miel. Moulin A Vent, a winner at Naas last time, is a likely starter in the Grade Two highlight for Noel Meade.

Ground conditions at both Gowran and Navan are currently described as heavy.

Modus is one of McManus’s better novices based in Britain and his trainer Paul Nicholls has indicated he will tackle the JLT Chase at the festival.

“It is an obvious race for him. He was very good the other day at Kempton. He jumps well and loves decent ground. That [JLT)]will be the main option for him.

“He is well capable and he is a 156 rated horse [OVER HURDLES.]. He is a good horse and it would be a great race for him,” Nicholls said.

Meanwhile, Gordon Elliott can increase his trainers championship lead over Mullins with a Fairyhouse double on Wednesday.

The title challenger is odds on again to dethrone the champion after a valuable Punchestown hat-trick on Sunday which stretched his prizemoney advantage to just over €316,000.

Results in a midweek fixture are hardly likely to prove decisive in this enthralling duel, but it does look set to be “advantage Elliott” on the day.

Moonlight Escape has been runner-up in her last two starts, including to Moyheena at Punchestown last time.

The Mullins team turn to Bryan Cooper for the ride on Force Of Forces in the second maiden, although Curious Times could be the solution to this.

Stuart Crawford’s runner ran well for a long behind Tornado Flyer and Getaway John in a bumper here and was too free prior to that over hurdles at Navan.

Elliott can also score in the Beginners Chase with Bold Sky. The ex-Henry De Bromhead runner was a point-to-point winner last month for the late Willie Codd and has her first start for the country’s leading trainer.

There is an 8.00 inspection at Clonmel on Wednesday morning ahead of its scheduled Grade Three card the following day. Parts of the track were unfit for racing on Tuesday and there is a threat of waterlogging.