Withhold and Silvestre de Sousa land the gamble in the Cesarewitch 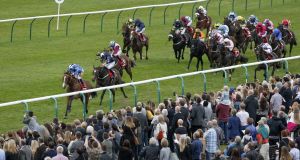 Withhold landed a big gamble when he powered clear of his rivals in the Betfred Cesarewitch at Newmarket.

The four-year-old had run just once previously this season, finishing third at Newbury three weeks ago on what was his first start since joining Roger Charlton from the yard of Charlie Hills.

With champion jockey-elect Silvestre de Sousa in the saddle, the 5-1 favourite was never too far off the pace and was sent into the lead before the home turn.

After having taken a few strides out of the field, De Sousa angled towards the stands’ rail and Withhold saw out the marathon distance well to score by three and three-quarters of a length.

Charlton told ITV Racing: “It doesn’t normally work, but this one has.

“I think Silvestre gave him a very enterprising ride, to have him up there from a wide draw.

“He’s a very nice horse and winning these races are very memorable.

“It was a demolition job, really.”

De Sousa said: “Mr Charlton left everything to me.

“He quickened all the way to the line. He has done it very well.

“He’s a lovely horse and he should improve.”