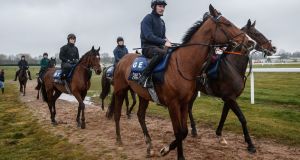 Mengli Khan’s sole start to date at Leopardstown saw him crash out through a wing of a hurdle when a heavy Grade One favourite last Christmas; it’s something to keep in mind perhaps when he returns to the track for the St Stephens Day feature.

The Gordon Elliott trained star subsequently redeemed himself with some high class hurdles form and looked a potential top-notch performer over fences on his steeplechase debut last month.

Mengli Khan barely had to break sweat to win by 10 lengths and his jumping was notably fluent for jockey Davy Russell.

It means he is set to start an odds-on favourite for St Stephen’s Day €100,000 Racing Post Novice Chase, a race with a fine history of progressing exceptional short-priced performers such as Douvan, Sizing Europe and Footpad a year towards Cheltenham festival glory.

Footpad was the last of three Willie Mullins trained odds-on winners in a row although the danger of betting short has rarely been more obvious than Vautour’s shock eclipse at 1-4 in 2014.

It was Elliott and Michael O’Leary who took advantage that day through Clarcam but Mengli Khan who will be the target this time even though one of his five opponents is another of O’Leary’s Gigginstown team, Mind’s Eye.

There was nothing in Mengli Khan’s subsequent starts to suggest that spectacular exit in last year’s big novice hurdle was anything but a once-off.

The Gigginstown team subsequently reckoned it could have been the shadow of the wing at that fateful second last flight – caused by a low-lying sun – that might have prompted Mengli Khan to run out.

More relevant perhaps could be that he is the most inexperienced in the race. Looking a natural when not under pressure is one thing. But if he can do the same against a horse like Le Richebourg who is already rated 150 over fences then Mengli Khan could be a prime Cheltenham contender.

However at the odds, and especially on ground which is mostly good on the steeplechase track, Le Richebourg could be a value alternative.

It will be a fourth start over fences for the JP McManus owned horse who was outstayed by Mengli Khan’s stable mate Delta Work in the Drinmore earlier this month. A drop back to two miles should be no problem. With Barry Geraghty on duty for McManus at Kempton, Mark Walsh takes the spin.

Walsh is also likely to fancy his chances in one of the earlier maiden hurdles when he teams up with the previous ‘winner’ over flights, City Island.

Grand National winning trainer Martin Brassil saddled City Island to win a maiden at the Galway Hurdle festival in August and subsequently described him in terms of being the best prospect he’s had in some time.

However in October City Island was disqualified after his Galway drugs test returned a positive for arsenic. Unfortunately for Brassil a seaweed based supplement fed to the horse contained arsenic which is a prohibited substance although that was something the authorities stressed the trainer couldn’t have been aware of.

Gordon Elliott saddles five of the 11 runners for the Grade Two Knight Frank Juvenile Hurdle in which a number of interesting French recruits make their first appearances in Ireland.

It might be however that proven Irish form comes to the fore. Even though Coeur Sublime is worse off at the weights for being beaten a short head by his stable companion Chief Justice at Fairyhouse last month he could progress from that outing the better.

Tisamystery is just 4lbs higher in the rating compared to 2017 and ran an encouraging race at Cork last month. De Bromhead could hardly be in better form going into Christmas having saddled a hat-trick at Thurles on Saturday.