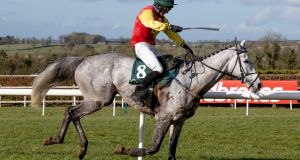 Hugh Morgan on Young Dev won at Navan despite braking a stirrup at the first fence. Photograph: Morgan Treacy/Inpho

Jockey Hugh Morgan and his stalwart partner Young Dev return to Navan on Saturday a fortnight after their remarkable ‘no irons’ success at the track.

Morgan all but wrapped up any ‘ride of the season’ honours when a stirrup broke jumping the first fence in a handicap chase and he was forced to jump the next 16 with no irons.

Not only did he pull off a remarkable piece of horsemanship in getting around, the claiming jockey and his willing ally managed to eventually pull out the most unlikely of victories.

“I’ve watched it back once or twice and looking at it as an outsider you’d say ‘will you pull the horse up? You’ve only jumped one fence, keep him for the next day.’ But being in the situation, in the heat of the moment, it just felt the right thing to do,” Morgan recalled.

It was Morgan’s first ride for both trainer Denis Hogan and owner Liam Mulryan and unsurprisingly he has kept the ride on the grey on Saturday when he switches to the smaller obstacles for a handicap hurdle.

Young Dev is rated a pound lower over flights which should put him in the mix, although the drop back to two-and-a-half-miles might be a negative. Instead Forrard Away could follow up a recent Fairyhouse success under a 10lb penalty.

Navan’s feature is the Grade Three Flyingbolt Novice Chase which can see the finish fought out between a pair of Gigginstown runners.

The mare Scarlet And Dove gets 7lbs from Epson Du Houx who didn’t cut much ice in handicap company last time but may be more at home in this sort of company.

The first of back-to-back at meetings at Leopardstown is on Sunday where the driest ground conditions for some time are likely to be seen.

Unlike most of the rest of the country selective watering is taking place on the famously quick chase course which will be used twice, including for the featured €40,000 TRI Handicap.

Willie Mullins runs Livelovelaugh over the same course and distance at which he was third to Off You Go at the Dublin Racing Festival. Faster going could prove in his favour.

The champion trainer should enjoy a lucrative session as his former Irish Cesarewitch winner Royal Illusion should be very hard to beat in a mares’ maiden. Klassy Kay and the ex-French Fly Smart also look noteworthy.

As a half-brother to a Breeders’ Cup Mile winner, Eyewitness should relish quick going in the bumper.

He does, however, have to concede 7lbs for winning at Naas where Hunters Yarn started a well backed favourite only to come up over six lengths shy of his rival.

With that experience under Hunters Yarn’s belt he might prove up to reversing the form.