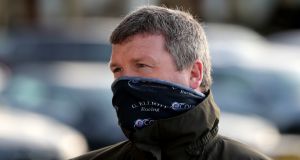 The image of Gordon Elliott on the corpse of one of his horses provoked widespread revulsion both within and without racing, and the damage it has done to the “good reputation” of the sport is incalculable. Photograph: Niall Carson/PA Wire

The Irish Horseracing Regulatory Board’s referrals committee will convene at 9.30am on Friday to attempt what is, almost certainly, an impossible task.

Since Saturday morning untold millions in Ireland, Britain and around the world have seen the grotesque image of the trainer Gordon Elliott astride a dead horse on his gallops. It is the committee’s job to determine the extent to which his action, and the fact it was recorded and widely published more than a year later, was “prejudicial . . . to the good reputation of horse racing”. It then needs to impose a fair, proportionate punishment on one of the most famous and successful trainers in the sport.

The panel has no meaningful precedents on which it can draw as it considers its decision. Racing has not seen a “disrepute” case of anything like this magnitude in the social media age. The incident in 2017 when Davy Russell angrily punched his mount in the head before a race was minor by comparison in terms of its reach.

What the panel may recall, though, is that the initial wave of anger over Russell’s punch was magnified when the first hearing into the case decided a caution was sufficient punishment. A hasty rethink led to the penalty being upgraded to a four-day ban, amid complaints from the jockey about “unacceptable and disgraceful” media coverage.

The image of Elliott on the corpse of one of his horses provoked widespread revulsion both within and without racing, and the damage it has done to the “good reputation” of the sport is incalculable. On that basis it could be argued the penalty, too, should be of similar magnitude: a ban from the sport that would effectively spell the end of Elliott’s career.

A counter-argument is this would also threaten the livelihoods of dozens of stable staff at Elliott’s yard if he is driven out of business, penalising them all for his self-admitted “moment of madness”. The devastating effect of an extended ban on Elliott himself also needs to be acknowledged.

The ultimate problem for the panel, perhaps, is that a “disrepute” charge is not fit for purpose in an age in which such a shocking image can be seen by millions in a matter of hours, and then endlessly revived as a stick with which the sport can be beaten for ever more. If the overall damage cannot be effectively assessed, how can any penalty be proportionate?

No one is likely to be satisfied by the outcome of the hearing on Friday. Not the casual browsers on social media who were shocked and repulsed to see a dead racehorse treated with such casual contempt. Nor the thousands of staff in racing stables, in Ireland, Britain and elsewhere, who care deeply for their horses, and could rightly add a deep sense of betrayal to their disgust at Elliott’s actions.

No penalty can adequately reflect – or undo – the damage that Elliott has done to the sport that made him. That is something that he, and everyone else who works in or follows racing, will have to live with once the decision has been handed down on Friday.