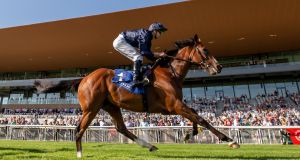 Aidan O’Brien may switch Armoury to Chantilly in a bid to win a first French Derby on Sunday. Photograph: Morgan Treacy/Inpho

The coronavirus pandemic will produce a unique scenario of four major European Classics in 24 hours this weekend and major Irish interest potentially in all of them.

However, Ireland’s champion trainer hasn’t ruled out switching one of them, Armory, to try and fill in a rare Classic blank in the following day’s French Derby (Prix Du Jockey Club) at Chantilly.

Both derbies have been pushed back a month in the revamped programmes caused by Covid-19.

The impact of the public health emergency also means that for the first time ever the Oaks will take place alongside the Derby at Epsom on Saturday.

The same situation applies at Chantilly where the French Oaks (Prix de Diane) will share billing with the colts’ race.

Throw in Enable’s heavyweight clash with Ghaiyyath, Japan and Lord North in Sandown’s Eclipse on Sunday and the scene is set for a rare concentration of Group One excellence this weekend.

Jessica Harrington has left her Coronation Stakes winner Alpine Star among 17 fillies still left in the French Oaks and keeps open the option of running Gold Maze in Saturday’s Derby at Epsom.

The maiden finished sixth to Santiago in last weekend’s Irish Derby. However Aidan O’Brien has opted not to send Santiago or any other of his Curragh runners to Epsom.

A total of 17 colts remain in the Derby with Frankie Dettori’s mount English King heading the market ahead of the 2,000 Guineas winner Kameko.

Most layers rate Russian Emperor the best of the strong Ballydoyle team and the most likely mount of Coolmore Stud’s No 1 jockey, Ryan Moore.

The make-up of the jockeys who will team up with other O’Brien runners is unlikely to be decided until final declarations on Thursday.

Travel restrictions mean Irish-based riders are unlikely to travel to Epsom and then face a 14 day self-isolation period on their return.

That means top cross-channel jockeys such as William Buick and James Doyle, both of whom have experience riding for Ballydoyle in the past, could be in line to team up with O’Brien.

His other Epsom options among seven entries include Vatican City, Mogul and Mythical.

“The plan is for them all to go, although Armory could go to France instead. At the moment the others are intended runners at Epsom,” O’Brien said on Monday.

Armory is a 10-1 shot in some lists for the French Derby with Godolphin’s French Guineas winner Victor Ludorum topping the betting.

O’Brien’s 1,000 Guineas heroine Love is clear favourite to emulate Minding who in 2016 doubled up on her Newmarket victory in the Oaks at Epsom.

She is joined among just 11 Oaks entries left in at Monday’s acceptance stage by her Irish 1,000 Guineas stable companion Peaceful.

The latter also holds an entry in the following day’s French Oaks over an extended 10 furlongs.

Travel restrictions in France also mean that locally based riders can expect to be popular with Irish trainers.

Joseph O’Brien has left in a raft of entries at Chantilly including seven of the 27 that remain in contention for the Jockey Club.

Among them is Crossfirehurricane who lost his unbeaten record when 10th to Santiago on Saturday.

Both Joseph and Donnacha O’Brien are contemplating sending runners in the Diane. The latter’s Irish 1,000 Guineas runner-up Fancy Blue could be joined by A New Dawn and New York Girl.

The revamped Group One programme means that Sunday’s Eclipse isn’t open to three-year-olds but still promises a clash to savour.

Just seven potential rivals remain in contention to take her on but they comprise an elite group of older stars.

O’Brien’s Japan, who failed to fire in Royal Ascot’s Prince Of Wales’s Stakes, may be joined his globe-trotting stable companion Magic Wand.

However both the winner of that Prince Of Wales’s Stakes, Enable’s stable companion, Lord North, and Godolphin’s Coronation Cup winner, Ghaiyyath are also set to line-up.