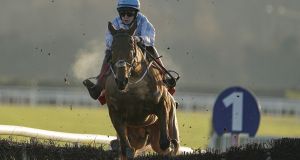 The date of the Dublin Racing Festival just over five weeks before Cheltenham means Honeysuckle is set to be one of the star names at Irish jump racing’s €1.8 million shop-window event.

Henry De Bromhead’s exciting mare is likely to have just a second start at two miles in the €200,000 PCI Irish Champion Hurdle on February 1st.

Unbeaten in half a dozen starts, Honeysuckle stepped up to Grade One level in style in the Hatton’s Grace Hurdle at Fairyhouse on her last start.

That was over two and a half miles, the same trip as Cheltenham’s OLBG Mares Hurdle for which she is a general 2-1 joint-favourite with Benie Des Dieux.

Honeysuckle also features among entries for the Champion Hurdle at Cheltenham and is a general 10-1 shot in those ante-post lists.

“It’s all about getting a run into her and when you look at the options there are three of them. There’s a two and a half mile mares race [Quevega Hurdle] on February 19th but we just feel that’s getting really close to Cheltenham.

“There’s the Red Mills at Gowran on the 15th and then there’s the Irish Champion Hurdle which is perfect timing in my opinion.

“If the mares race was on the 2nd, 3rd or 4th maybe she’d be in that. So we’re probably leaning to the Irish Champion but nothing is absolutely confirmed,” De Bromhead said on Monday.

The Co Waterford trainer wouldn’t be drawn on speculation about a Cheltenham target should Honeysuckle impress on her first start at the minimum trip since winning a Listed event at Thurles over a year ago.

“We’ve more or less agreed we’ll go for the Irish Champion because it’s good timing and other than we haven’t really discussed anything else,” he added.

A total of 14 entries remain in the Irish Champion Hurdle after Monday’s latest forfeit stage for the festival’s eight Grade One events.

Honeysuckle isn’t the only De Bromhead star with more than one Cheltenham festival option although A Plus Tard’s festival target in March ultimately looks like to be the Ryanair Chase.

A wide-margin handicap winner at last year’s festival, A Plus Tard broke through into the Grade One ranks when upsetting the hot-favourite Chacun Pour Soi at Leopardstown over Christmas.

That performance sees him as a general 8-1 shot for the Queen Mother Champion Chase but he is disputing favouritism for the Ryanair.

Before that a return to Leopardstown’s extended two mile trip is on the cards next in the €150,000 Ladbrokes Dublin which is also on Day One of the festival.

“He’s probably more of a two and a half mile horse. But we think going left-handed is very important for him and it’s about the only option prior to Cheltenham. We’re very much leaning to the Ryanair [at Cheltenham]. He won more or less over the course and distance last year.

“I know he was good at Leopardstown but there was a nice ease in the ground and it was two miles and a furlong whereas the Champion Chase is a mile and seven and a half over a pretty tight track,” De Bromhead said.

Chris’s Dream was a resounding winner of the Troytown Chase at Navan in November, a handicap performance that saw him raised a stone in official ratings and enter some ‘Blue Riband’ markets as low as 25-1.

He features among 15 entries unveiled on Monday for the Paddy Power Irish Gold Cup, the €250,000 feature event in the third renewal of the third Dublin Racing Festival.

“He has seemed to peter off at the end of the season [in the past] so we backed right off him after the Troytown. He’s in mighty form now and he’s being trained for the Irish Gold Cup,” De Bromhead said.

The Christmas Grade One winner Delta Work and Kemboy have been installed as 7-4 joint-favourites for the big race by the sponsors.

In other news, Un De Sceaux and Du Seuil, first and second in last month’s Tingle Creek Chase, are set to clash again in this Saturday’s Grade One Matchbook Clarence House Chase at Ascot.

Un De Sceaux landed the weekend’s feature three years in a row between 2016-18 but missed the race last year when it was won by Altior.

The Punchestown fixture cancelled on Monday due to stormy conditions has been rescheduled to Wednesday although it the prospects for Fairyhouse on Tuesday that appear in the balance.

An 8am morning inspection will take place due to forecasted heavy rain.

“We’re told we could get another 8mms. If we get that we might be in trouble. We’re just about raceable at the moment, just on the right side of the line,” the Fairyhouse manager Peter Roe said on Monday,

Should racing get a green light then Eden Flight’s second Irish appearance in a maiden hurdle will be interesting.

The 2017 French bumper winner was disappointing in his Irish debut at Navan in November behind Andy Dufresne but could be worth another look in an easier contest.