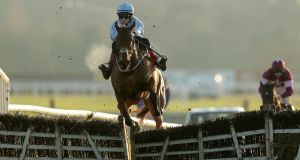 Rachael Blackmore and Honeysuckle on the way to winning the Hatton’s Grace at Fairyhouse in December. Photograph: Laszlo Geczo/Inpho

The mare has won all six of her racecourse starts to date and graduated to Grade One glory in last month’s Hatton’s Grace Hurdle at Fairyhouse.

Her only start at two miles however came at Listed level at Thurles over a year ago and the upcoming Dublin Racing Festival highlight at Leopardstown will also be her first time racing left-handed on a racecourse proper.

On Tuesday De Bromhead pointed out that Honeysuckle won a point to point going left-handed but conceded it would be a new test for the rising six-year-old star.

“It can be a factor. She hasn’t shown us any signs of it. She won her point to point at Dromohane which is left-handed but other than that all her races have been right-handed. That’s going to be something new,” he said.

As for just a second start at the minimum trip, the trainer said: “She’s been very good at two and a half so we never really saw much reason to change her from that. Again that’s new to us at this level. It could be a different ball game so we’ll learn.”

Asked if victory at Leopardstown could result in a switch of Cheltenham objective from the OLBG Mares Hurdle to the Champion Hurdle itself, De Bromhead said any decision would be made much closer to the time.

“You’d have to say if she did win it would be a decision you’d be leaving until much nearer the time and there would be a lot of things to weigh up,” he said.

Connections of Presenting Percy are aiming their star chaser at Sunday week’s Paddy Power Irish Gold Cup rather than try for a hat-trick of wins in Thursday’s Galmoy Hurdle at Gowran.

Owner Philip Reynolds has been encouraged by reports of watering at Leopardstown ahead of next week’s Dublin Racing Festival and is opting to warm up for Cheltenham over fences rather than flights.

It’s a boost to the festival organisers with so much focus on the run-up to next week’s action centring on ground conditions and the potential impact of watering on the steeplechase track.

Presenting Percy failed to make the frame behind Delta Work in the Savills Chase on his last start over Christmas, a relatively disappointing outcome on the back of a fine return to action when third in the John Durkan.

“Having read reports that Leopardstown start watering this week I think it is right for him to eye his opposition once more before they hopefully all line up in March.

“I have great sympathy for the management at Leopardstown. Watering in January just doesn’t sound right. But the Dublin Racing Festival is a hugely important new initiative in Irish racing which would be at grave risk if there was a repeat of last year.

“My heart will be in Gowran where it would have been nice to have a go at three in a row. But this is a game for the head so we’re off to Leopardstown with fingers crossed,” he added.