Harrington to see how Sizing John shapes up at Leopardstown 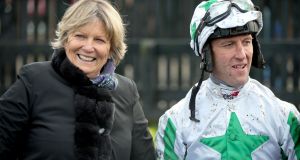 Trainer Jessica Harrington and jockey Robbie Power. Harrington says the logical race for Sizing John is the Ryanair at Cheltenham, but they will see what happens on Sunday. Photograph: INPHO

The Ann and Alan Potts-owned gelding finally stepped out of Douvan’s shadow to win the Kinloch Brae Chase at Thurles last time out. Having been put in his place seven times by Willie Mullins’s superstar, Sizing John beat Sub Lieutenant over 2½ miles and will be running over three miles for the first time this weekend.

Stable jockey Robbie Power partnered him in exercise on Wednesday morning, and is hoping to be given the all-clear by doctors to be able to return to action in time to ride him.

“He’s [Sizing John] been good, I’m very happy with him, and he did a nice breeze this morning,” Harrington said. “Robert rode him, and hopefully he’s going to be back on Sunday to ride him as he knows him. Robert was delighted with him.

“As for Cheltenham, we’ll just have to see. There’s so much going on with horses not turning up and we’re not sure where some are going to go.

“The logical race would be the Ryanair, but we’ll just see what happens on Sunday, so we’ll leave our options open for the rest of the season.”

Jezki, owned by JP McManus, could try to repeat his 2014 success in the Stan James Champion Hurdle next month or step up to three miles for the Sun Bets Stayers’ Hurdle.

“It was a nice race for him at Navan, and he went there and won easy. He’s now going to go to the Red Mills over two miles at Gowran on Saturday week,” Harrington said.

“After that we’ll decide on his next target. He’s entered in the Champion Hurdle and the three-mile hurdle. We’ll just keep all our options open. We’ll just see how he gets on next time. Time will tell.”

Walsh told his Paddy Power blog: “The intention is to let Bapaume and Meri Devie run in the Grade One Spring Juvenile Hurdle over two miles to stake their claim for a Triumph Hurdle place.

“Both will work again before I’ll make a decision on who I’ll ride at final declaration time on Friday morning,

“They’re two decent juveniles, and traditionally this has been a very good race and the best of the Irish juveniles are likely to turn up.

“Joseph O’Brien’s Ivanovich Gorbatov was fourth in this contest last year and went on to win at the festival. If there’s a clear-cut winner they’ll go to Cheltenham fancying themselves to run a big race.”