Carlingford Lough has all eyes on Irish Gold Cup 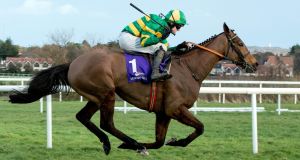 Carlingford Lough and Mark Walsh wining the 2016 Irish Gold Cup at Leopardstown. The JP McManus-owned star is bidding to become just the third horse ever to win the race for a third year in a row. Photograph: Inpho

Implications for the upcoming Cheltenham festival are never far away from minds when it comes to this Sunday’s €500,000 Leopardstown card, but for Carlingford Lough the centrepiece of the only programme in Ireland to host four Grade One races really will be his Gold Cup.

The JP McManus-owned star is bidding to become just the third horse ever to land the €150,000 Stan James Irish Gold Cup for a third year in a row, and is set to be joined by another McManus hope, Minella Rocco from Jonjo O’Neill’s yard, on Sunday.

And if Minella Rocco is attempting to cement a place in next month’s Gold Cup at Cheltenham, there are no such festival considerations for Carlingford Lough this time.

Subsequent to his first win in the race In 2015 – when it was still known as the Hennessy – the John Kiely-trained 11-year-old finished out of the money at Cheltenham behind Coneygree.

After his dramatic Leopardstown victory a year ago, he did better in the Cheltenham “blue riband” when fourth to Don Cossack.

Yet with the evidence of a lack-lustre RSA effort at the 2014 festival also thrown in, the McManus team has decided to skip Cheltenham entirely this year. Instead the focus is on defending the two Irish Gold Cup versions, first at Leopardstown and then at Punchestown in April.

Both McManus and Michael O’Leary’s Gigginstown Stud team have three entries each among the 10 horses remaining in the Irish Gold Cup. The big-race sponsors immediately made Don Poli a 5-2 favourite, with another O’Leary-owned horse trained by Gordon Elliott, Empire Of Dirt, rated a 4-1 next best alongside Minella Rocco.

Carlingford Lough is a 5-1 shot, but a 20-1 SP proved no barrier to him pulling out an unlikely victory last year when Gigginstown’s Valseur Lido memorably lost Ruby Walsh at the final fence. It was also the third Grade 1 victory at Leopardstown for this remarkably resilient performer who will have his 31st career start at the weekend.

“He’s been a fantastic horse for us, brilliant; it’s very hard to find the likes of him,” said Berry, who added that jockey arrangements would be sorted out closer to the weekend, with Mark Walsh, who rode Carlingford Lough a year ago, waiting to team up with whatever runner Barry Geraghty chooses to discard.

So if the focus with Carlingford Lough is resolutely on the weekend, then at least one eye among the McManus team will be on Cheltenham when it comes to Minella Rocco, the horse who beat Native River in last season’s four-miler at the festival.

“If he puts in a good performance on Sunday, hopefully then he can go to Cheltenham for the Gold Cup,” confirmed Berry.

Just two horses have ever won at Leopardstown and proceeded to win the Gold Cup at Cheltenham – Jodami (1993) and Imperial Call (1996.) Lord Windermere was sixth to Last Instalment in 2014, before ultimately scoring a month later at the festival.

As well as Don Poli and Empire Of Dirt, Gigginstown can call on last year’s runner-up Road To Riches, while Fine Rightly, third a year ago, is also in line for another shot at the race.

Jessica Harrington’s Kinloch Brae winner, Sizing John, is likely to put his stamina to the test for the first time over three miles.

The horse which has completed the Cheltenham-Aintree-Punchestown Foxhunters hat-trick for two years running has won the Leopardstown event just once in his illustrious career, and will face a maximum of nine opponents on Sunday.

“He always seems to take the run, and it isn’t a bad race with Ted Walsh’s lad [Foxrock] in there too. Enda [Bolger] is very happy with the horse, but you’d imagine he will come on for the run,” Berry said.