Government confirms racing not planned to restart until June 29th 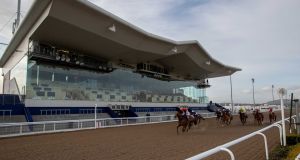 Ten race meeting, including this one at Dundalk, took place behind closed doors before the sport stopped in Ireland on March 24th. Photo: Morgan Treacy/Inpho

The government has confirmed its plan for Irish racing not to resume behind closed doors until the end of June.

In a blow to the sector it was confirmed by the Department of Agriculture, Food & Marine on Thursday evening that June 29th is the date outlined for racing to return behind closed doors.

That is as part of the third stage of the government’s five-phase ‘Roadmap for Reopening Society & Business’ due to the Covid-19 pandemic.

Prior to last Friday’s speech by Taoiseach Leo Varadkar, and the release of the plan, racing officials had been confident racing here would return as part of phase one which is due to begin on May 18th.

Afterwards there was hope that could still occur and racing might be separated from other sports taking place behind closed doors as it comes under the umbrella of the Department of Agriculture.

Racing resumed in Germany on Thursday while the sport is also due to start again in France on Monday. There are plans for British racing to begin again later this month.

However after almost a week of intensive lobbying by Horse Racing Ireland - and a notable policy of not commenting by the sport’s ruling body during that time - the news that June 29th remains the plan is a major setback for the thoroughbred sector.

A return to action weeks after its major European competitors have resumed has been described as having a potentially catastrophic impact by some trainers.

John Oxx, the renowned Curragh trainer, has said there is a danger of owners with an international profile moving horses out of the country as a result.

In a statement on Thursday, the HRI did hold out hope that an earlier resumption may still happen, possibly on the Phase Two section of the government plan which is due to take place on June 8th.

“In publishing the roadmap last week, the government stated an appetite to engage and consult with sectors on possible changes to the timings of the plan and HRI has been fully engaged in that process this week.

“In addition the Taoiseach stated in the Dáil earlier today that the government would examine proposals from sectors of the economy wishing to have restrictions lifted earlier than scheduled in the government’s roadmap and HRI is availing of this offer,” it said.

There has been no racing in Ireland since March 24th.

In the statement, HRI’s chief executive Brian Kavanagh also stated: “Prior to March 24, race fixtures were among the last group of Tier 2 commercial activities to continue with ten fixtures staged safely behind closed doors with only key personnel permitted on site.

“Horse Racing Ireland’s Covid-19 protocols which were in place for those fixtures have been further strengthened in the meantime and we feel that the industry can safely resume sooner rather than later and will continue to engage with Government on that basis.”