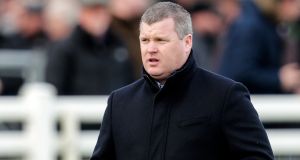 Gordon Elliott rode 46 winners on the racecourse and almost 200 in point-to-points during his career as a jockey. Photograph: Laszlo Geczo/Inpho

Now that’s he’s in the position of pariah Gordon Elliott’s former role as racing’s poster boy against charges of elitism has been pushed to the background.

Elliott turns 43 on Tuesday with his public reputation having plunged as low as his career heights have soared.

A distasteful photo of him sitting on a dead horse that emerged at the weekend has tainted Elliott’s name in a way that could potentially be irreversible.

That single image has reinforced popular prejudices among racing’s critics about it being an arrogant and insensitive private world of wealth and privilege where the animals at the centre of it all are little more than disposable assets.

Such black and white opinions ignore how the vast majority within racing devote their lives to working with these animals and are similarly appalled at such an ugly portrayal of entitlement.

The grim irony then is that Elliott is perhaps racing’s greatest example of someone who has beaten the odds without any kind of privilege behind him.

The son of a panel beater and a housewife is the sport’s great ‘blow-in’.

Unlike his great rival Willie Mullins who is part of a racing dynasty, Elliott has no background in the Sport of Kings.

A recognisably ordinary upbringing in Summerhill, Co Meath changed only when the 13-year-old Elliott showed up at a nearby yard looking for something to do one summer.

What he found was a route out of the ordinary and school couldn’t compete with that.

The burly figure he cuts now disguises how he was a decent amateur jockey, riding 46 winners on the racecourse and almost 200 in point-to-points.

He rode for British racing’s own great interloper, Martin Pipe, who transformed the face of jump racing in the 1980s. Elliott kept his eyes open and listened to a man he still regards as a mentor.

But when he took out a licence to train a handful of horses himself in a rented yard in 2006 it was mostly a case of ‘Gordon Who?’ Everybody wasn’t long finding out.

Within a year he had won the sport’s most famous race, the Aintree Grand National, with Silver Birch.

Elliott had had just a handful of other winners prior to that, all of them at small tracks on Britain’s backwater circuit. He hadn’t had a winner in Ireland. Yet his immediate impression was spectacular. Those first impressions didn’t lie.

His ability to hoover up small races with moderate animals quickly attracted powerful owners such as Ryanair boss Michael O’Leary.

His Gigginstown Stud horses became the basis of Elliott’s big-race ambitions which reached a peak with Don Cossack’s Cheltenham Gold Cup success in 2016 and Tiger Roll’s back to back Grand Nationals in 2018 and 2019.

Just how unlikely such a stratospheric rise to fame has been is not lost on others within racing.

“He’s a mechanic’s son, not a lord’s son. He started off with a couple of yaks, renting boxes,” Gigginstown Stud’s Eddie O’Leary once said. “It’s incredible what he’s done. But he’s driven and he has a natural flair for training.”

That flair is reflected in 32 Cheltenham festival victories in all over the last decade, and twice being top trainer at the sport’s biggest meeting. It meant O’Leary’s decision to wind down his racing interests almost two years ago had other top owners queuing to take his place at Cullentra Stables - the state of the art yard near Longwood which Elliott established from scratch after buying agricultural land contains over 200 horses.

They include perhaps racing’s brightest young star, the unbeaten Envoi Allen, one of an exclusive and expensive National Hunt string owned by the Cheveley Park Stud in Newmarket.

That they have said they are “truly horrified and dismayed” by the photograph, and are awaiting the outcome of an Irish Horseracing Regulatory Board investigation before making any decisions, underlines how much Elliott has on the line.

Up to now his greatest frustration has been finishing runner-up to Mullins eight times in Ireland’s trainers’ championship. That threatens to pale in comparison to the impact of a single image.

It has already seen him lose sponsorship from the betting giant Befair, fearful of the commercial implications of being associated with such a visceral story.

Normally such optics are of little concern for someone whose ‘everyman’ image isn’t contrived.

Elliott is no natural at ‘schmoozing’ rich owners, preferring instead to let his results do the talking. Socially he prefers the company of trusted friends from his school and riding days, some of whom are integral to the running of his operation.

Up to now the cocktail has worked to an extent matched only in modern times by the veteran trainer Jim Bolger. He too broke into racing’s top echelons from a background outside of the sport.

Elliott has maintained he has little ambition to switch to the richer and more global Flat sphere, preferring instead to focus on what he knows. But he is very much into unknown territory now as to what his future holds.