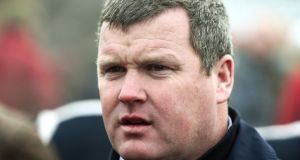 Godon Elliott: ‘I appreciate that an initial viewing of this photo suggests it is a callous and staged photo but nothing could be further from the truth.’ Photograph: Lorraine O’Sullivan/Inpho

Minister for Agriculture Charlie McConalogue has said he was “appalled” by the photograph of horse trainer Gordon Elliott sitting on a dead horse at his training operation.

The Grand National-winning trainer apologised for the photograph taken of him sitting on the animal while seeming to hold up two fingers in what looked like a peace gesture.

Mr Elliott said that he is fully cooperating with an investigation launched by the Irish Horseracing Regulatory Board (IHRB) after the image was circulated on social media over the weekend.

In a statement, Mr McConalogue said “The photograph is not reflective of the highest animal welfare standards we demand for the sector, nor does it reflect the tremendous care horses receive in Ireland. It is not the kind of image we want associated with horse racing in Ireland.”

He said he supported the IHRB’s investigation and declined to comment further.

Minister of State at the Department of Agriculture Pippa Hackett said that Mr Elliott had shown “a very concerning and disturbing error of judgment.”

“It is appalling to see a high-profile trainer behave in such a manner,” said the Green junior minister who has bred racehorses with her husband at their Co Offaly stud farm.

Ms Hackett called for a swift investigation by IHRB into the incident.

The National Animal Rights Association has said it was “absolutely horrified and saddened” to see the photo emerge.

Laura Broxson, founder of the association, said she hoped the IHRB investigation into the incident “helps shine a light in a broader term on the industry itself”.

Mr Elliott, who is based in Co Meath, confirmed on Sunday night that the image which had been circulating on social media was “an old photo” of him and said he continued to cooperate fully with the IHRB’s investigation.

The image showed him on a phone while seeming to hold up two fingers in an apparent peace gesture.

“Firstly, I apologise profoundly for any offence that this photo has caused and can categorically state that the welfare of each and every horse under my care is paramount and has been central to the success that we have enjoyed here at Cullentra,” Mr Elliott said in a statement.

“The photo in question was taken some time ago and occurred after a horse had died of an apparent heart attack on the gallops. I appreciate that an initial viewing of this photo suggests it is a callous and staged photo but nothing could be further from the truth. At what was a sad time, which it is when any horse under my care passes away, my initial reaction was to get the body removed from where it was positioned.

“I was standing over the horse waiting to help with the removal of the body, in the course of which, to my memory I received a call and, without thinking, I sat down to take it. Hearing a shout from one of my team, I gestured to wait until I was finished.”

The IHRB said there was “an investigation ongoing” in relation to the incident. “As is the case with all investigations carried out by the IHRB, there is a process that must be followed and that will be the case in this instance,” a spokesman said. “We will be dealing with it as quickly as possible.”

Ms Broxson said animal rights and welfare activists were “appalled” by the image. “I think everyone would agree that it’s an industry that’s too overlooked that we really need to start putting a magnifying glass over,” she told The Irish Times.

“I hope this is just the beginning of a wider investigation into the horseracing industry as a whole, much like we saw with the RTÉ Investigates programme on greyhound racing.”

The Irish Horse Welfare Trust said “we have to wait for the outcome of a formal investigation” but added the photo was “disappointing” to see.

Gigginstown House Stud and Ryanair owner Michael O’Leary who have been one of Elliott’s biggest supporters – with the pair most notably combining to win two Grand Nationals at Aintree with Tiger Roll - said on Monday they would maintain their support for the trainer although they were “deeply disappointed” by the episode.

In a statement issued on Monday, O’Leary described the photograph in question as “unacceptable”, but said he accepted the trainer’s “sincere, profound and unreserved apology”.

“We have always found that animal welfare comes first, second and third at Cullentra. From the facilities, to the brilliant team of people led by Gordon, our horses are trained with no expense spared for their development, welfare and care,” the statement read.

However, gambling company Betfair - for whom Elliott has been an ambassador for several years – has discontinued its association with the trainer with immediate effect.

Horse Racing Ireland said it “unreservedly condemns the disturbing photograph” that emerged on social media over the weekend. It said the image does not reflect the “care, attention and respect that racehorses receive”, and does a disservice to the thousands of people who look after their horses on a daily basis.

“Horse Racing Ireland notes and supports the IHRB investigation into the circumstances around the photograph. From a disciplinary perspective, the matter is in process, so any further comment on the matter or the detail of the case at this time would not be appropriate,” it added.