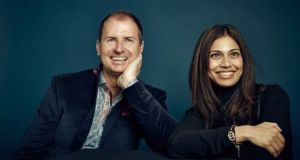 “On several occasions I thought he was going to say that this is too much.”

While working on a former Irish jockey’s book, both author and subject walked into the hospital where the jockey had once undergone life-saving surgery for 12 fractures to his skull.

Declan Murphy – a renowned jockey in the 1990s – was riding at Haydock Park in England, when he suffered a head collision with his horse at the final hurdle of the Swinton Hurdle. Unconscious, he fell to the ground where the hoof of another horse struck him with a second blow to the head, leaving him with the multiple fractures.

Speculation grew that he was dead, but he survived after being rushed to a nearby hospital. The recovery period was brutal however and regaining his memory was an arduous journey which started with him believing he was 12-years-old when he woke up from his coma.

He’s still missing four-and-a-half years of his life, which caused some complications when writing the book that would later be called Centaur.

Two decades after his miraculous survival, Murphy returned to that hospital with his book-writer, Ami Rao, to speak to the surgeon, and take a look at the operating theatre.

During the visit, the staff produced a box containing some important items belonging to Murphy, which they had kept at the hospital since the day he first arrived.

There in the box lay the goggles, boots and breeches that he was wearing on May 2nd 1994 and after all these years, he had been reunited with them again. Rao was filled with dread as she looked on, and feared that the emotional impact might be too much for him to continue with the project.

Rao, an Indian-born writer, warned Murphy that writing Centaur would hurt, and the process would require him to confront painful memories from his recovery which he had previously tried to block out.

They discovered early on that they were similar characters, which helped Rao understand when it was the right moment to push him, and when she should retreat.

“It wasn’t difficult for me to get into his head. I would know within five minutes of us meeting to try and talk about the book whether he was going to give me anything or not. And when he wasn’t, I knew not to push. Neither of us were doing this book for commercial reasons. If I was being paid to write the book I might have lost patience because it happened many times.

“It wasn’t even a factor so within five minutes, I would know that I’m not getting anything so I’m just having a drink with a friend and that’s fine.”

She first suggested writing his book in October 2015. The Limerick man, who prefers to live a private life, had already rejected three book offers, while another party approached him with a movie deal that didn’t interest him.

When Rao put herself forward for the job, she was initially denied as well. They were virtual strangers and Rao knew nothing about horse racing, but she felt an inexplicable urge to write Murphy’s story.

Curious about her proposal, Murphy called Rao up to probe her a little further. She promised to answer his questions in writing, and after producing a two-page explanation about why his story warranted a book, Murphy gave her permission to proceed.

Both of them agreed they didn’t want a traditional racing book, but Rao needed to explore the sport before she could decide on what shape Murphy’s story was going to take.

“I went and bought every racing autobiography that was out there. And every single day there would be a new package from Amazon with another jockey’s autobiography and Declan would actually come to my house and see a new book there and would say, ‘what are you doing, I don’t want a book like this’.

“My answer was that I needed to see everything that was out there.”

They were progressing well up until around chapter three, when Declan dropped the revelation about the missing four years from his memory and sent his author into a panic.

The pair were in Murphy’s house, looking at photos of some of his greatest ever wins. Murphy was explaining the backstory behind each one before adding that he couldn’t actually recall the races and that these photos are evidence of what happened.

It was a big shock but I find that we’re versatile as a specious. We process things and then we rise to the occasion

What made this confession all the more difficult for Rao to hear, was that the four years Murphy couldn’t remember was the time in which he was at his peak as a jockey.

“It was a big shock but I find that we’re versatile as a specious. We process things and then we rise to the occasion. I’d say, for the sake of the book, that turned out to be a blessing in disguise because what it does, is disrupt the notion of traditional autobiography. The ‘I’ voice in an autobiography doesn’t exist when you can’t remember it.

The pair set about reconstructing those lost four years, by pouring over every piece of material relating to Murphy’s career during that time. Newspaper reports, Youtube videos of his races and interviews with those who were central to Murphy’s life and racing career, helped them assemble a narrative.

They toured around Ireland twice, soaking up all the relevant information along the way.

Rao even got Murphy’s approval to speak to his former girlfriend, who played an integral role in his recovery. He was reluctant at first, but like the jockey who establishes a relationship of trust with their horse, Murphy had to place his faith in Rao and believe that she would steer his story in the right direction.

Her lack of horse-racing knowledge actually turned out to be an advantage, when it came to enquiring about how Murphy fell from his horse in Haydock.

“I thought to ask the questions because of ignorance. If you’re too connected to something, you don’t think to ask certain questions because you know it, it’s what you do day in and day out. It’s something that you’re intimately familiar with.

Murphy took some dangerous risks during his recovery. He left the hospital within two weeks of his operation and stopped taking his medication against medical advice to regain some control over his life.

Similarly, Rao also took a gamble in volunteering to write Centaur but it was a leap of faith that has reaped huge rewards.

“The price of curiosity in something that’s unfamiliar is error, and I’m sure there are mistakes that a technical racing person would find. I would just hope that they forgive those mistakes in the spirit of someone who wasn’t afraid to try something new, because I believed in the story.”

“It’s not about a jockey, it’s about a man who happened to ride horses. My little ambition for this book is for anybody to pick it up and be able to relate to it in some small way and give them hope.”